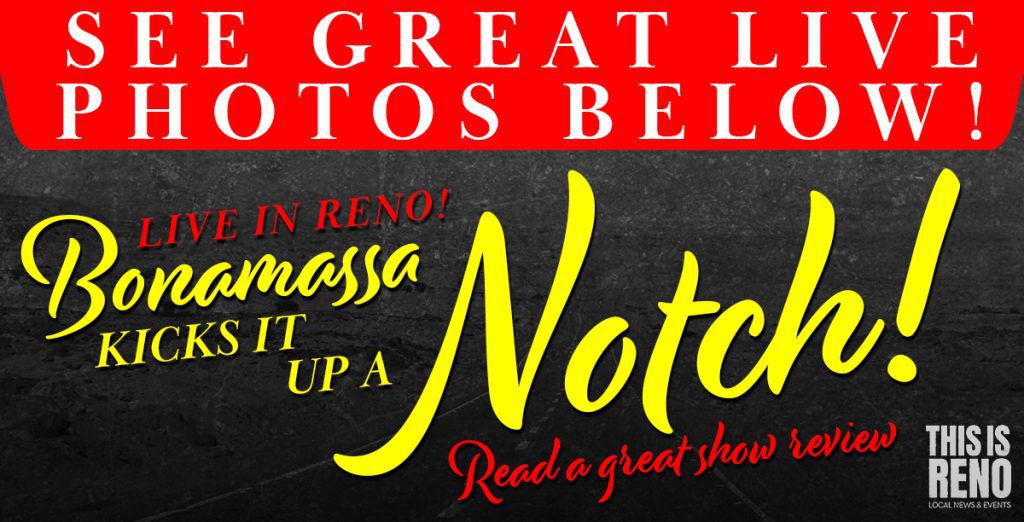 Joe Bonamassa kicks it up a notch at Grand Sierra Resort

After 20 years Joe Bonamassa returned to the Grand Sierra Resort Saturday night. However, on his last visit it was the Reno Hilton and his band was playing in The Garage as a “sort of” house band. Who out there remembers The Garage? It was almost that long ago when I first went there and saw The Blues Monsters shaking it up.

This was my third time covering a Joe Bonamassa show, with the previous shows being 10 and four years ago. I entered into this one a bit tentative, since at one of the previous shows we left early because it was unnecessarily loud, even painful.

I’m happy to report that Bonamassa, like a fine wine, has gotten better with age and he sold out the show.

My trepidation was soon quelled. The sound was great with plenty of crisp, clean volume, but not too much. The first thing I noticed was that he had left the gray suit and tie in the closet and added a dash of Chris Isaak-style flair to his stage outfit, with plenty of embroidery embellishments. I thought he looked quite nice up there.

His voice, as always, was magnificent. He has a great voice for the blues and nailed it all night long. Joe is definitely a gifted guitar player, playing both sweet and somber blues runs, and ripping off powerful and lightning fast licks at will, all evening long.

He’s very comfortable on stage, talking to the audience frequently. Apparently the ending of “Breaking Up Somebody’s Home” got fouled up. He was laughing afterward, and said they screwed that ending up. He told the band, “Let’s do that ending again,” so his drummer kicked it back in and they played the last few bars of it over, having a laugh when they finished. “That was better,” he said. And it was.

Later, he shared a story about playing in The Garage on the casino floor back in the day, and meeting up with some of Dolly Parton’s band, who were playing in the theater. They gave him a tour of the Grand Theatre, where he was playing Saturday.
“There’s a couple of times, ya know, where there’s those moments when you realize you’ve made it, and tonight is one of those for me,” he said. “Cuz we’re not playing out there in the lobby for some cats that just want to play video poker all night long. We’re in here making noise…thank you very much for coming.”
His two female backup singers, Dannielle De Andrea and Jade MacRae, were great with fantastic voices, lots of energy and joy. They have obviously put in the time to create special choreography for their performances, getting very involved at times. They had their routines down.

There were several musical high points during the show, too, with the kind of crescendos that get you on your feet hollering and clapping.

One of them was a tasty classic blues arrangement of the Otis Rush song, “Double Trouble,” which starts off slow and sultry, then gradually builds to a feverish pitch. This version featured a great piano solo by Rock and Roll Hall of Famer Reese Wynans at the end.

An unscheduled feature was when a drunken fool took it upon himself to walk past the front edge of the stage about two feet in front of Joe, holding his freshly purchased drinks up as high as he could while cheering. He repeated this intrusion later with his next round of drinks. There seems to be one in every crowd.

“I Didn’t Think She Would Do It” was another power song that got the whole room worked up. Like many blues songs, it tells the story of a relationship gone bad. Shock and dismay, her fault, my fault: it’s one of those tragic stories that most of us can relate to. With a fast tempo and hard driving beat, it’s hard not to become a head banger during this thunder storm of a song.

This show was great from beginning to end. It started with a modest old blues sound and built up like an incoming storm all the way to a huge climax, wrapping up with a killer version of ZZ Top’s “Just Got Paid Today” and a short tag of “Dazed and Confused” at the end of it.

Another Bonamassa punchline was his story about the GSR food tickets he was given. He told of trying to be frugal and kind with them and just ordering a sandwich downstairs, so as not to spend the casino’s money. When he presented his voucher for payment they said they did not take them. Somebody in the crowd yelled, “Charlie Palmer’s!”

“Fuck Charlie Palmer’s,” Bonamassa replied. “I brought all these people in here and they didn’t even have a table for me!”

Funny and talented. Live music. There’s nothing like it.

Thanks to Nick McCabe of ThisIsReno for this stellar show review. To stay on top on all things about Joe, be sure that you sign up for Our Newsletter and Joe’s Social Media Sites to make sure you have the most up to date information.