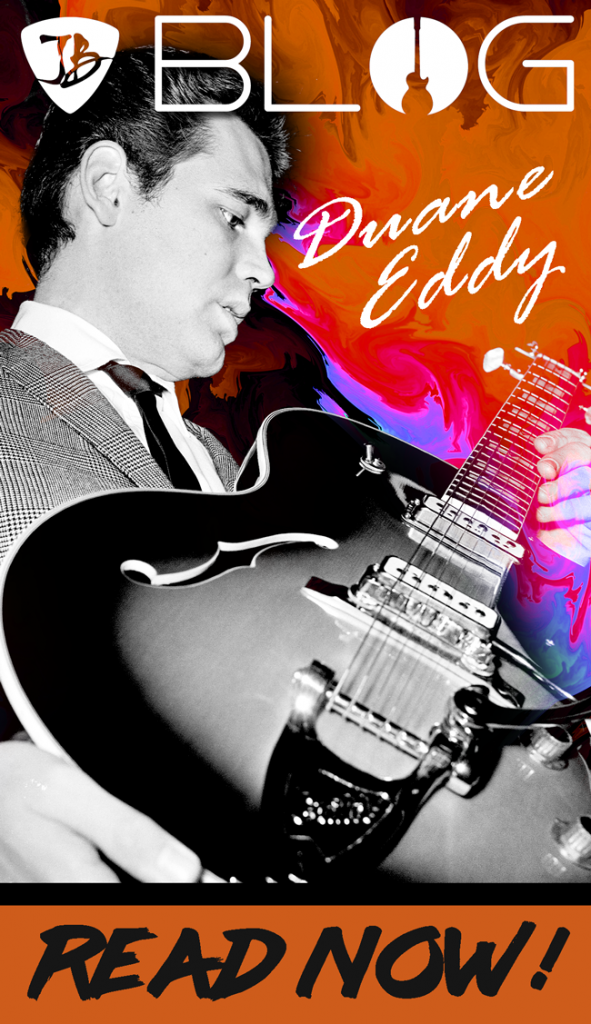 Duane Eddy! I got hooked on him when a neighbor gave me some beat up 45’s he had in his garage. As a kid, I thought I hit the jackpot! But really, it’s just a ploy to get me to help him clean out his garage. Its cool because he also gave me a kids drum set that also rocked. Sadly my drumming days were short. My parents didn’t appreciate my unique style of playing.  I digress!

Being the youngest isn’t what its cracked up to be!  But low and behold, I did play the hell out of those 45’s which includes Duane Eddy, Dick Dale, Patsy Cline, Wanda Jackson etc. I may not play an instrument but I’m still making a career out of music. I’m also still a fan of Duane Eddy and the rest of those artists on those 45’s. Furthermore, here’s why you should love Duane Eddy!

The Man Behind The Riff

This eternally resonant low-note guitar riff has launched many hits. The world can also thank Duane Eddy for making it happen! Because of him, many timeless hits with this riff have paved the path for rock n roll music. He’s known for his pioneering attitude towards instrumental rock guitar music in the late 1950s and early 1960s. And he’s also responsible for one of rock music’s elemental sounds known as “twang”.

Likewise, you can look up “twang” on the internet, you’ll see Duane Eddy’s name and picture next to it. Just Kidding! But that’s how important he is in rock music. Even more, he’s has 15 Top 40 hits between 1958 and 1963 under his belt. So, I think he’s doing pretty good for himself!

While some ponder if you can make a career just performing instrumental music, Yes, is the answer you should hear. There are plenty of musicians that make a lucrative amount of money performing instrumentals. Look how many years Lawrence Welk was on television with his orchestra, Henry Mancini, Herb Alpert, Booker T & The MG’s, Percy Faith and many more!

You can also add Duane Eddy to this list. By 1963, he had sold 12 million records. Going forward, it has to be over more than a 100 million since. Plus, he’s still considered one of the most successful instrumentalists in rock history.

Even though this guy is in his 80s, the only thing that keeps him from performing is the current pandemic. So, if you get the chance to see him live, do it because he’s fantastic & he tells great stories, and a genius on the guitar!

Taking up guitar at the age of five, Eddy quits high school to pursue a career in music. At sixteen, he forms the duo “Jimmy and Duane” with school friend Jimmy Delbridge. During a performance at a local radio station, they meet disc jockey Lee Hazlewood, who produces a single for them in 1955 called “Soda Fountain Girl”. During this time, the duo is also performing all kinds of local gigs and radio performances. Shortly after, they join “Buddy Long’s Western Melody Boys”, playing country music in and around the city.

Eddy who is a devotee of Hazelwood’s eccentric radio show begins dropping by the show to rid the station of its excess country records. Lee befriends Duane, and they begin fleshing out songs that Lee had written and records them at a local studio. In 1957, Lee gives up dj-ing for writing and producing full-time when he accepts a job as staff producer with Dot Records. After a while, he returns to Phoenix as an independent producer. Under Hazelwood’s tutelage, Eddy develops the simple but evocative twang sound from his own Chet Atkins-influenced guitar style.

Together they record a long string of hit instrumentals, beginning with “Rebel-Rouser” (1958), which, features the raunchy, tenor saxophone of Steve Douglas. Among Eddy’s other hits are “Ramrod,” “The Lonely One,” “Peter Gunn,” and the theme for the film “Because They’re Young” and others.

In November 1957, Eddy records an instrumental, “Movin’ n’ Groovin’”, co-written by Eddy and Hazlewood. As the Phoenix studio had no echo chamber, Hazlewood buys a 2,000-gallon (7570-litre) water storage tank that he uses as an echo chamber to accentuate the “twangy” guitar sound. And yes, that’s how things got done back then!

He had a part in the film A Thunder of Drums. He and Ravi Shankar wrote the song “The Trembler” together.

Eddy’s playing influenced a bevy of guitarists, including Hank Marvin of the Shadows, George Harrison, and Bruce Springsteen.

His music is featured in Forest Gump, The Trembler, Scream 2 and Natural Born Killers.

Art of Noise enlisted Eddy for a 1986 remake of “Peter Gunn” that brought a new twist to Eddy’s 1960 hit. Reaching the top-ten worldwide and won a Grammy as that year’s best rock instrumental.

Eddy received Guitar Player magazine’s “Legend” award in 2004; only the second guitarist so honored (the first being one of his own idols, Les Paul).