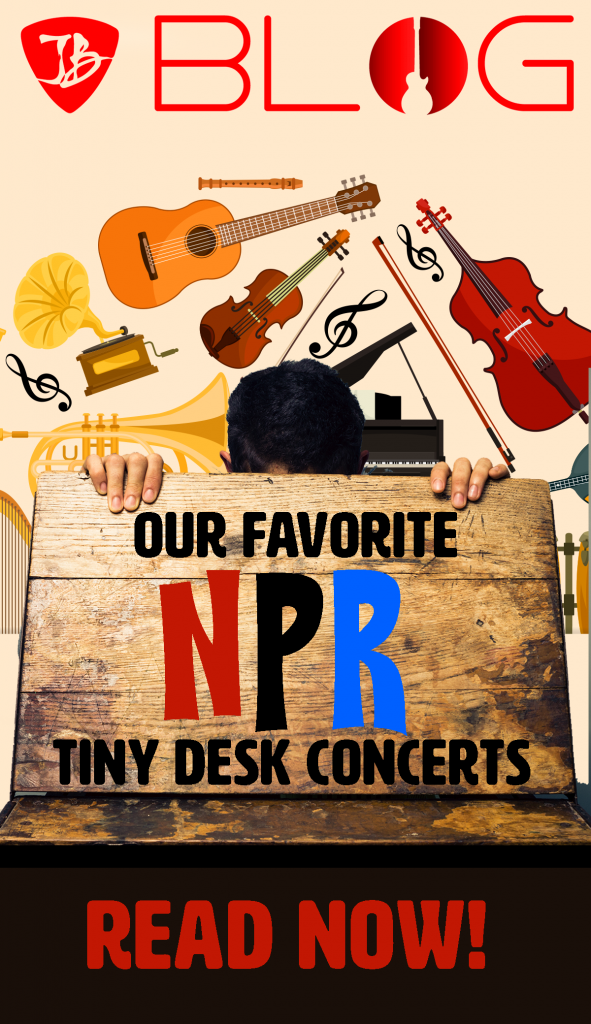 Favorite NPR Tiny Desk Concerts blog came from a discussion we had in the office one day. While we enjoy all styles of music here at the JB headquarters, we appreciate out of the box ideas too! For me, I like to hear these performances mainly because it gives me a different point of view them. When you normally hear some of these artists, they’re performing at a stadium level or a club. Plus, some of them have a band backing them up. At the Tiny Desk stage, it’s a stripped down performance which makes for a great time in a more relaxed atmosphere.

Tiny Desk Concerts, a video series of live concerts hosted by NPR Music at the desk of “All Songs Considered” host Bob Boilen in Washington, D.C. The first Tiny Desk Concert came about in 2008 after Boilen and NPR Music Editor Stephen Thompson left a bar show frustrated that they couldn’t hear the music over the crowd noise.

Thompson jokes that the musician, folk-singer Laura Gibson, should just perform at Boilen’s desk. And today, we have plenty of performances to choose from thanks to Bob Boilen. Here is a few of these performances that we like. They are in no particular order and while there are many videos to choose from, these are our favorites. Enjoy!

There’s nothing really to say here because this is Robert Cray performing. An artist that has sold millions of albums, while constantly touring and still today, creating amazing music. He had us hooked from day one with his album “Strong Persuader”. When he sings, his soulful stories resonates with his audience and such is the case here.

The Black Crowes are one of those bands that you can hear their music on the radio and recognize them instantly. It’s hard to believe they recently reunited to celebrate the 30th anniversary of their debut “Shake Your Money Maker”. In between the performances, they’re making jokes about the desk not really being that small. The vocals and harmony are still there.

Performing his first Tiny Desk Concert, Gary Clarke Jr, came to impress but was a little overdressed for the small place. Not a problem he still rocked the place with some serious soulful blues along with a hilarious commentary in between songs.  When you see him live, the shows are loud and over the top. While this is very laid-back and mixed with a nice groove throughout. He kills it on “Pearl Cadillac” which he dedicates to him mom for the sacrifices she made in her life.

Susan Tedeschi’s voice just takes over the room in this episode and takes us all to church! Along with Derek Trucks Jamming by her side. You’ll also get some funky jazzed out blues. If this doesn’t get you up and grooving then you need to hit replay a few more times. They’re called a jam band for a reason…Because they can blow the place up with their music and allow each member to showcase their musical skills and shine in their own right. Definitely no auto-tune here!

Listening to this performance reminds me of the days when you would hang out in your room listening to the latest vinyl to add to your collection. William Bell known for writing and performing many tracks that came from Stax Records. His Bell’s soulful voice backed by his band that includes a kick-ass keyboard player along with a horn section that gets the groove rolling for the bass player to kick in.

Plus, it always cool when the featured artist lets their band show off what they bring to the table. Very much appreciated! It just proves that this is a tight-knit band  that knows what they’re doing. Being the total package!

Frampton Comes Alive – Need we say more? The double live LP soared to number one on Billboard’s top 200 album chart and held the top spot for ten weeks. It also sold more copies than any other album that year, topping out at eight million sold in the United States alone.  Although he’s dealing with some health issues, this performance is flawless in our eyes. The energy is still there just and so is the humor talking to the staff about how two of his biggest hits came to him on a beach on the same day. Trust me, it will make your day!

This man can tear up a Hammond B3 organ, and we’re so happy that he’s playing his iconic track ” “Green Onions,” that he recorded with his band “Booker T and The MG’s”. While, he’s taking piano lessons he sees the Hammond B3 at his piano teacher’s house. He asked if he could play it, and she said no! But somehow, he got under her skin, and she taught him to play. He explains the unique ways of playing the organ and how he learned to play other instruments along the way to the offices of Stax Records. Great musician, great instrument, great environment.

Some other NPR video’s to check out:

Let Us Know What your favorite Tiny Desk Moment is!

Thanks to NPR For giving us great music to help get us through the day! It’s programs like this that helps everyone keep their sanity during these trying times!