After Joe Bonamassa’s set, Landmark employees may have had to reset the smoke detectors.

The Utica native, all duded up in a black suit with a rainbow of musical notes adorning the flanks, dazzled a near-sellout crowd Saturday night at the downtown Syracuse theater. Wearing glasses like an agent out of The Matrix, Bonamassa looked stolid and authoritative as he paced the stage, starting off the show with “Evil Mama.”

Alternating stage lights bathed the hometown hero in orange then green, yellow then white, as his hands, like giant spiders, danced around his glinting guitars that bounced the light out across the adoring audience. 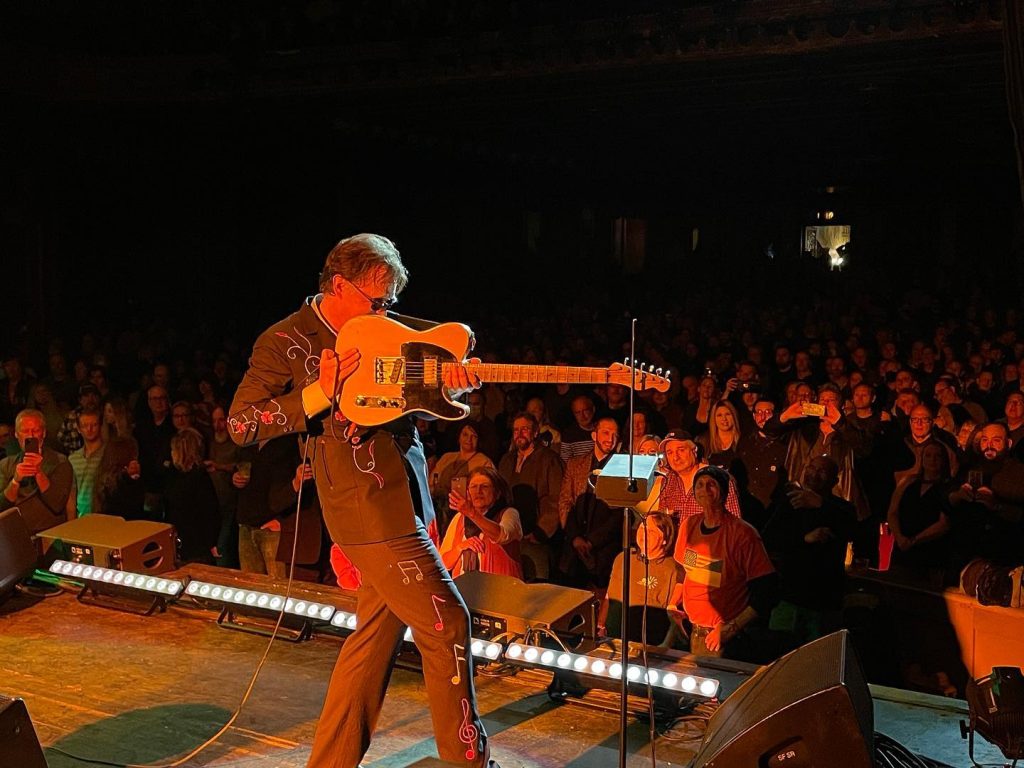 Running a tight ship, Bonamassa led his band through the first five songs of the set at a breakneck pace, pausing only to switch guitars between songs. Next came the hypnotic intro to “Midnight Blues,” a sleepy, cozy groove that evolved into an all-out rocker.

The band was a blues train, and its conductor just kept shoveling on the coal. Even after 30 minutes of singing, shredding, and strumming, the virtuosic bluesman showed no signs of slowing.

But the serious, businesslike demeanor came off with the glasses, which he removed after the fifth song, “I Didn’t Think She Would Do It,” to wipe his perspiring face with a towel – providing that he is, in fact, only human.

“Good evening, Syracuse! “I’ve been traveling the road for years, I’ve been an adult a long time,” Bonamassa joked. “There’s a couple of things that stand out, like, say the Royal Albert Hall in London – or when I do the Landmark in Syracuse. Don’t worry, I’m going to do that bit tomorrow in Albany.”

Bonamassa, who has lived in California for years, said that normally when he performs, he tells crowds that he is from Los Angeles, but, laughing, admitted that he cannot say that at the Landmark.

“You all still remember me as Smokin’ Joe Bonamassa from Utica, New York!” In good spirits, Bonamassa introduced his bandmates, including rhythm guitarist Joe Smith, whom the lead player called “the best guitarist on this stage.” Later on in the show, Smith played a ripping guitar solo that lived up to Bonamassa’s praise.

Keeping up with an artist of Bonamassa’s caliber is no small task, but the band-members held their own, perhaps none so more than keyboardist Reese Wynans, Bonamassa’s main counterpart.

Wynans has a lifetime of experience in trading lead lines and spectacular solos with talented guitarists – after all, he was inducted into the hall of fame as a member of Double Trouble, Stevie Ray Vaughan’s backing band.

Well, if SRV’s sound hit like a Texas Flood, Bonamassa plays with all the tenacity of a New York blizzard – rolling in slow and steady like storm clouds, eventually erupting in furious flurries of notes, a swirl of sounds.

The Utica native played a two-hour set of the finest homegrown blues. A master of tension, Bonamassa frequently brought the band to a hush, leaving nothing but a gentle, constant bass drum thump to accompany the fragile, delicate guitar playing.

These moments were often short-lived, though, as audience members simply couldn’t contain their excitement. Shouts of “Smokin’ Joe!” drowned out Bonamassa’s soft sounds, becoming so unreal at one point that the guitarist had to quiet the audience down with a finger to his lip.

As a twenty-first-century bluesman, Bonamassa isn’t content with regurgitating tired tropes and tricks. Rather, he often seeks to shake the genre at its very foundations, all while staying true to tradition. The best example of this came at the end of the show when Bonamassa topped off his final solos by playing a theremin with the pickups of his guitar.

Even without the local connections, an encore would have been in order after such a sharp performance. So, it came as no surprise when chants of “Smokin’ Joe!” filled the Landmark. The showman soon gave his fans what they were looking for; armed with an acoustic guitar for a change, Bonamassa came duckwalking back on stage, all smiles, while walloping out a thumping, jangling bluegrass stomper.

But for all his acoustic prowess, Bonamassa is a downright electric performer, and he’s most memorable when he plays electric. Standing bow-legged, head looking upwards in ecstasy, the ethereal shimmer of his gold-top Les Paul personifying the sublime sounds soaring from the instrument, he looked the part of the ultimate guitar hero – and one could almost smell the smoke.

Thanks to Patrick McCarthy of Syracuse News for this stellar show review.

To stay on top on all things about Joe, be sure that you sign up for Our Newsletter and Joe’s Social Media Sites to make sure you have the most up to date information.