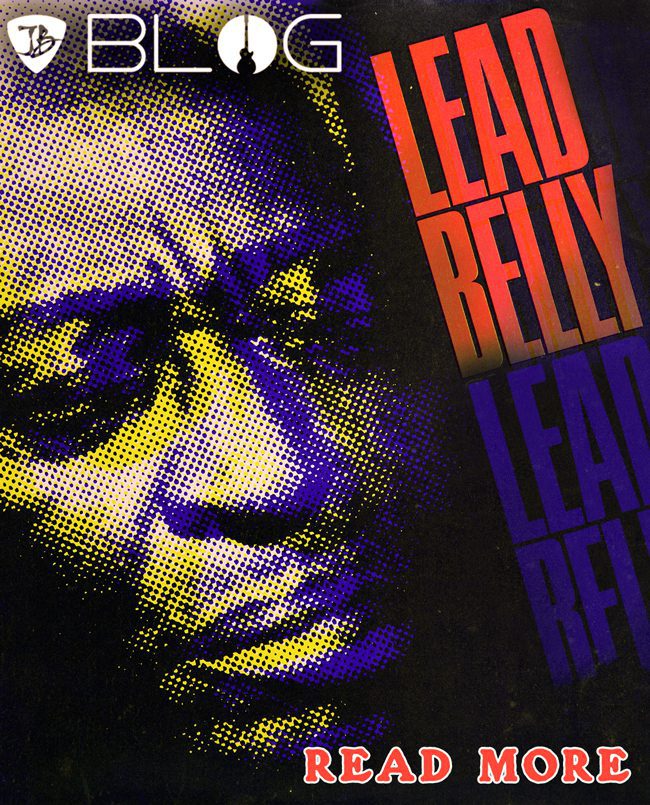 Lead belly aka Huddie Ledbetter is the embodiment of American roots music. Not only did he perform and play music, but he also lived it. Which to some music historians, makes him one of the most important folk musicians of the twentieth century because to them he was the real deal of the blues and still is for some.

Besides playing the guitar, he also plays the piano, mandolin, harmonica, and violin. Sure, it’s great to play an instrument but it’s his voice that make people notice him. Pathos is the word I would use for many of his songs that he would perform. Because when he sang his songs, you could hear and feel the emotions emanating from his soul.

Whether it was live or on a recording you could tell how genuine he was when it came to singing the blues. Below is Lead Belly’s version of Goodnight Irene which is one of the most popular Lead Belly songs. There’s even a modern day version of it now!

Lead Belly is born in Mooringsport, Louisiana, in the late 1880s. By age two, he starts playing and exploring music. Later, his uncle turns him on to the guitar and from that moment on he is electrified by the guitar. Performing as a teenager at local dances it during this time he starts honing his guitar playing. By age16, he leaves his family home and heads out of Mooringsport and settles in, Shreveport, Louisiana.

It’s where he supports himself as a musician. Around 1912, he’s now living in Dallas with his new wife. As well as meeting Blind Lemon Jefferson another street musician. The pair has a mutual interest in music and start performing together. At this point, Ledbetter concentrates on what becomes his signature instrument: the 12-string guitar.

House of the Rising Sun

While the newest versions of this song tend of creep me out to a certain extinct, I have to say, that I really do appreciate Lead Belly’s version. Don’t get me wrong, I also listen to “The Animals” version of this song as well. But when you listen to Lead Belly playing it, his version of the song takes you down a totally different path than the others. Like a survivor’s story of it.

Either way, Some music historians say It’s the “first folk rock hit.” So, it doesn’t matter who the author is. Because, these different versions are done in such a way that it resonates with the listener no matter who the performer is. Lastly, Lead Belly plays it in 3/4 time rather than the usual 12/8 which gives a slightly different feel to the song. Which is rather nice to hear!

Alan Lomax along with his brother John Jr often worked on the field recordings along with their father growing up. Alan Lomax and his father discovers Lead Belly at the Angola Prison in Louisiana. He’s serving time for murder which he claims is in self defense. They champion for Lead Belly to be set free, and he’s heading home. Other stories state that he gets an early release for good behavior.

They record several songs which includes “Goodnight Irene.” Next they basically introduce Lead Belly to the world as well as folk Scholars, college audiences and mainstream music. Their book “Negro Folk Songs as Sung by Lead belly” offers up a new perspective of the beginnings of early Folk & Blues music. While, also showcasing the lives of the musicians who created the music.

Afterwards, the elder Lomax has a falling out with Lead Belly, and they part ways with each other. But Alan Lomax stuck by Lead Belly through the thick and thin of everything going on. Even when he goes to jail once again. They continue to record his songs, stuck by him as an advisor and works out a recording deal with the MusicCraft label where he records until his death in December 1949.

Lomax continues his journey in the music scene working with other artists such as Pete Seeger, Woodie Guthrie, Jelly Roll Morton among many others. He still works on field recordings until he leaves the Library of Congress in 1943 to join the army. Once he leaves the military, he’s back in the music scene discovering new artists. If he hadn’t reached out to these artists and recorded them, we would not know their stories from their own point of view or the inspiration / story behind the songs.