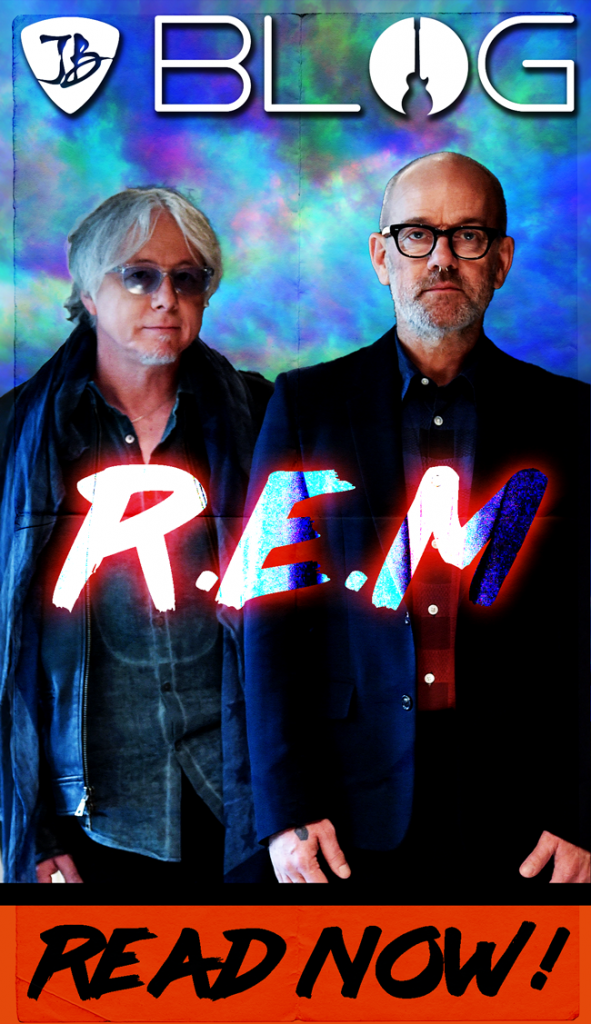 What makes Athens so special besides being a cool college town? It also has a wonderful music scene. In 1980, Peter Buck meets Michael Stipe in Wuxtry Records, the Athens record store where Buck works. Furthermore, it’s a place where musicians and artists can be their authentic selves while cultivating their art.

Turns out they find out that they have similar tastes in music and soon become friends. Next, they recruit drummer Bill Berry and bassist Mike Mills through a mutual college friend and start practicing together. At this time, they’re playing locally as the “Twisted Kites.”

Towards the end of the summer, they change their name to R.E.M. and start touring throughout the south. “Radio Free Europe” is their first single that gets them signed.

For those of us that work in music retail and at college radio at the time and hear “Radio Free Europe.” We saw a light at the end of the tunnel of something new on the horizon. We also knew this band, along with the others that followed was going to be a defining time in music. Little did we know that the music scene was getting a reboot!

“Losing My Religion” is the first single from their seventh album, Out Of Time. Meanwhile, the band wasn’t sure how fans would react to the song due to the lyrics. It’s a song about obsession and unrequited love. And how we question ourselves, our relationships, and faith while looking for answers. It can be emotional. We’ve all been there before!

For me, I think it’s a smart choice on the band’s part because they showcase a different side of themselves. As, soon as I heard the mandolin playing I was hooked. Plus, the video imagery is epic and beautiful.  The video is directed by Tarsem Singh, who did En Vogue’s “Hold On” and the Jennifer Lopez movie “The Cell.”  Meanwhile, it ends up being their biggest hits of their career.

Man on The Moon – Andy Kaufman

Watching Andy Kaufman on Saturday Night Live was special for a lot of people and for Michael Stipe as well. Whether Kaufman was on Taxi or SNL, this comedian was a genius at his craft. Unfortunately, he passes in 1984. But with the lyrics from this song, not only was it a hit for R.E.M. but is also made Kaufman even more iconic for newer generations. In 1999 Milos Forman made an Andy Kaufman biopic called “Man on the Moon.” When R.E.M. tours with Bruce Springsteen on the 2004 Vote for Change Tour, Springsteen would duet with Stipe on this song every night.

This is another favorite album of mine! Also, one I pretty much played the hell out of.  But, I wasn’t the only one because anytime you turned on MTV in the 90s, you saw “Fall on Me” a lot! “Life’s Rich Pageant”.  It’s heir most accessible record to date. Upon its late summer release in 1986, “Life’s Rich Pageant” is greeted with the positive reviews that had become customary with each new R.E.M. album, and it outstripped its predecessor’s sales.

For 2011’s “Collapse Into Now”, it bounces all over the place musically. It’s got a throwback to Classic rock but with better instruments and gadgets. Which, gives it an updated feel to it. For example, rock songs with slower ballads and moody atmospherics. “Discoverer” reminds me of Velvet Underground in the beginning. After listening to the tracks it very updated vintage R.E.M. It’s a great album if you’ve been a fan from day one. Sadly, the band calls it quits in 2011.

The next installment in this reissue campaign is a 25th Anniversary Deluxe Edition of Automatic for the People in November 2017. A year later, the group releases R.E.M. at the BBC, a box set containing eight CDs and a DVD chronicling all their live work for the British Broadcasting Company. A 25th Anniversary edition of Monster appeared in 2019.