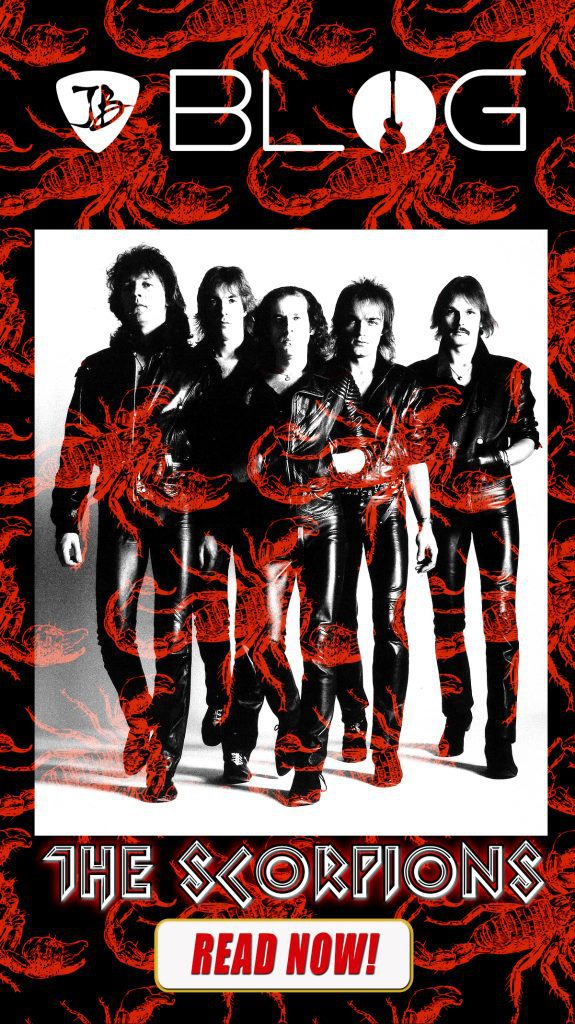 Scorpions – The Monsters of Rock

Lucky for me, I get tickets for the “Monsters of Rock Tour” in 1988. Furthermore, I win a pair of tickets on the radio. But the best part is that it will be the first time I see Metallica, Scorpions, Van Halen, Dokken and Kingdom Come at the same concert!.  Taking place at the Orange Bowl in Miami, the traffic sucks but all of us are ready to rock! There were seats but nobody is sitting in them.

From what I remember, it’s June so it’s hot and humid, great music and alcohol. Scorpions walk out and the crowd goes insane!  Furthermore, with Van Halen coming on after them, All of these  bands leave an impact on what a great rock concert is supposed to be. Like time standing still and everyone is just in the moment and the bands are playing like there’s no tomorrow. Amazing!

First off, we have to thank Rudolf Schenker for having the brilliant idea to start a band in 1965. Not only did he start out playing rhythm guitar, but he is handling the vocals as well. But he manages to keep the band afloat and a few years later, things start to take a positive turn. In 1970, Schenker’s brother and Klaus Meine join the band and everything seems to click.

In 1972, they release their debut album “Lonesome Crow” with Lothar Heimberg on bass and Wolfgang Dziony on drums. During, this tour they open for UFO. Towards the end of it, guitarist Michael Schenker accepts an offer of lead guitar for UFO.  Uli Jon Roth, a friend of Michael’s, gets introduced to the band and helps them finish off the tour.

With Michael Schenker leaving, it creates a conundrum for the rest of the band. So, they offer Uli the guitarist position, but he declines preferring to stay with the band “Dawn Red”. The band Scorpions disband in 1973. During this off time, Rudolf realizes that he still wants to play music. So, he reaches out to Uli Jon Roth because he likes the synchronicity that they had. In a nutshell, Rudolf starts performing with Red Dawn and likes the set-up of this new band.

Consisting of Roth, Francis Buchholz (bass), Achim Kirschning (keyboards) and Jürgen Rosenthal (drums). They invite Klaus to join on vocals which he does. With the key members of Scorpions being in “Red Dawn”, they decide that it makes more sense to use the Scorpions name because they are more well-known in Germany’s rock scene. Totally makes sense, and we’ll just say that they took a short hiatus and call it a day. Ok?

Rise To Fame – Fly To The Rainbow

In 1974, the new line-up releases “Fly to the Rainbow”. The album proves to be more successful with songs such as “Speedy’s Coming” and the title track established the band’s sound. Achim Kirschning decides to leave after the recordings. Jürgen Rosenthal is drafted into the army. In 1976, he joins a German progressive rock band called “Eloy” recording three albums. He is replaced in July 1974 by Jürgen Fechter. In 1975, Rudy Lenners from Belgium becomes their new drummer.  In 1975, they release “In Trance”, the album that takes the band on it’s next musical transition. As well as getting people to take notice due to the heavier sound.

In 1976, they release “Virgin Killer” which attracts a lot of attention due to the original album cover which made the album re-issued with a different cover in certain countries. But despite this, it is one of the releases that really defines their exit from rock to a more metal sound. The following year they lose Rudy Lenners leaves and is replaced by Herman Rarebell.  Next up is “Taken By Force” shortly after Roth decides to leave and forms “Electric Sun”.  The band is doing a tour in Japan in 1978 Which becomes their first live album and Roth’s last performance with the band. This is when they bring in guitarist Matthias Jabs.

As you can see, the band is in constant change when it comes to band members but also, at this point, they also change labels. Michael Schenker returns for a bit and stays for the Lovedrive recordings. Which is a good thing because the critics are loving this album and direction. This is where the Scorpions formula comes into play hard rock songs mixed with melodic ballads. In 1980 they released “Animal Magnetism” which features The Zoo, Make it Real, Holiday and more. It’s this time that Klaus Meine is having throat problems and requires surgery on his vocal cords.

So, while he’s recovering Don Dokken comes on board with the album “Blackout.” Meine recovers and is able to continue on with the band and the album releases in 1982. This is where MTV shows up, they start to get more exposure. They perform at the Moscow Music Fesitival and again more changes separating from their long-time manager Dieter Dierks. In 1990, they release “Crazy World’ which doesn’t do as well as other albums but instead a single song Wind of Change that connects with people all over the world. Also, appropriate for all the changes within the band.

The 50th Anniversary World Tour (Aka Return to Forever Tour) starts on May 1, 2015, in Zhenjiang and finishes in Berlin on December 2, 2016. It’s in support of band’s eighteenth studio album Return to Forever and a celebration of bands fifty years in music business.  Also in the mix is a release of several deluxe editions of their albums. Fast Forward to 2020 – it has been announced that the band is working on a new album that is scheduled to come this year…When?

We’re not sure but considering everything that this band has been through and how long they’ve been together, I’ve got the feeling that it will be worth the wait. While this blog only skims the surface of how great this band is, we encourage you to explore their web-site (https://www.the-scorpions.com/) as well as checking out the streaming options that are available. Or like myself, pull out the vinyl records and play them loud! Air guitar playing is welcome as well.  What a better way to deal with the current issues we are dealing with than with music.