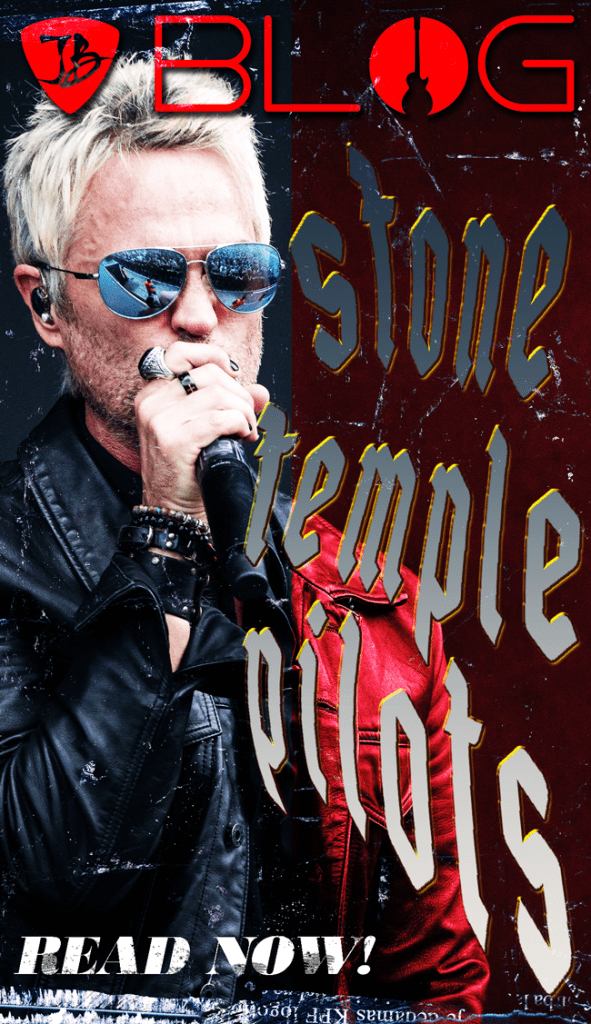 “The early beginnings of Stone Temple Pilots start out with two brothers who form a group called “Mighty Joe Young’. Robert (bass) and Dean DeLeo (guitar), together with vocalist Scott Weiland and drummer Eric Kretz. They started playing gigs around San Diego and gaining a decent local fan base. Their first real show is supporting Henry Rollins at the Whiskey A Go Go. Shortly after, they get a record deal from Atlantic Records and start recording their first album as Mighty Joe Young. Needless to say, there was a blues artist already performing with the same name.

Having to make a quick decision on the name of the band, they eventually settle on Stone Temple Pilots. They release their first album “Core”. In 1992 becoming one of the most commercially successful bands of the 1990s. Even more, it was a tip of the hat to the 70’s style of rock. Depending on who you talk to, a lot of music critics considered them just another band trying to imitate the grunge sound.

Sure, the critics were brutal at first but lucky for them, the song “Plush” was their saving grace. The MTV acoustic performance of the song took them to the top of the charts. With Weiland’s vocals, over the top personality and flamboyant attire, he was the perfect frontman for the band. Add in the musical genius of the Deleo Brothers with Eric Kretz on the drums, and they’re on their way to stardom.

Despite the critics, the band still continues to gain fans by hitting the road touring with Rage Against the Machine and Megadeth as the opening act. But with the MTV Unplugged, and the touring that they were doing. They still couldn’t catch a break with the media. Needless to say, in 1994 as a group they win a Grammy Award for Best Hard Rock Performance for “Plush”.

In the spring of 1994, Stone Temple Pilots return to the studio to work on their second album, “Purple”. They complete it in less than a month. Needless to say, Purple debuts at number one in the United States upon its release on June 7,1994. With hits like Interstate Love Song, being a hit followed up with “Vasoline” and “Big Empty” which is used in the movie “The Crow”. Needless to say, this album is also a hit shortly after its release selling three million copies right out of the box.

The band releases the album “Tiny Music… Songs from the Vatican Gift Shop”, on March 5, 1996. Which gets mixed reviews. But what made it great was that they left the grunge behind and focused more on a glam and psychedelic direction of music.  Rolling Stone even features the band on their cover in 1997. While this is great for them as a band, Weiland is dealing with a nasty drug habit and heads into rehab. They start pulling out of different gigs and tours especially with backing out of a Kiss reunion tour. The rest of the band works on other projects during this time.

A light at the end of the Tunnel?

For 1998, they release another album titled No. 4 Which takes them back to their beginnings. It also features the song “Sour Girl” featuring Buffy The Vampire Slayer’s Sarah Michelle Gellar. MTV played the hell out of it and VHI Storytellers had them on an episode. As well as a tour with the Red Hot Chili Peppers so for them as a band, things were getting better for the band. In 2001, they release their 5th album “Shangri-La Dee Da” which wasn’t really as commercial for the band. Yet, it keeps them touring with the likes of Linkin Park and Godsmack on the family Values tour. Furthermore, the label considers this album a commercial disappointment. The band decides to put all STP projects on hold and take a break.

On June 26, STP releases its first-ever concert film, Alive in the Windy City, on DVD and Blu-ray. Which is filmed at the Riviera Theatre in Chicago. Shortly after there’s a lot of tension within the band because they felt that Weiland didn’t have the vocal range to perform their hit songs anymore. One thing leads to another and Weiland is fired from the band in 2013. The three remaining members of Stone Temple Pilots performs with Chester Bennington of Linkin Park, appearing as special guests at the 21st Annual KROQ Weenie Roast. Bennington joins the band and performs with them as a member of STP. In 2015, Bennington leaves the band to work with Linkin Park. Sadly, he commits suicide July 20, 2017.

On December 3, 2015, Scott Weiland is found dead of an accidental overdose while on tour. After all that’s happened, you would think that would stop. But instead, they continue and in 2016 they launch an on-line audition for a new singer.  On November 14, 2017, the band reveals that Jeff Gutt is their new lead singer. They release individual tracks of the latest album.  And a year later, on November 14, 2017, Stone Temple Pilots officially announce that Gutt is their new lead singer and played their first concert with him that same night at the Troubadour in Los Angeles. They were looking for someone that could sing their earlier hits as well as new songs.

BE SURE, TO CHECK OUT OUR OTHER BLOG POSTS!