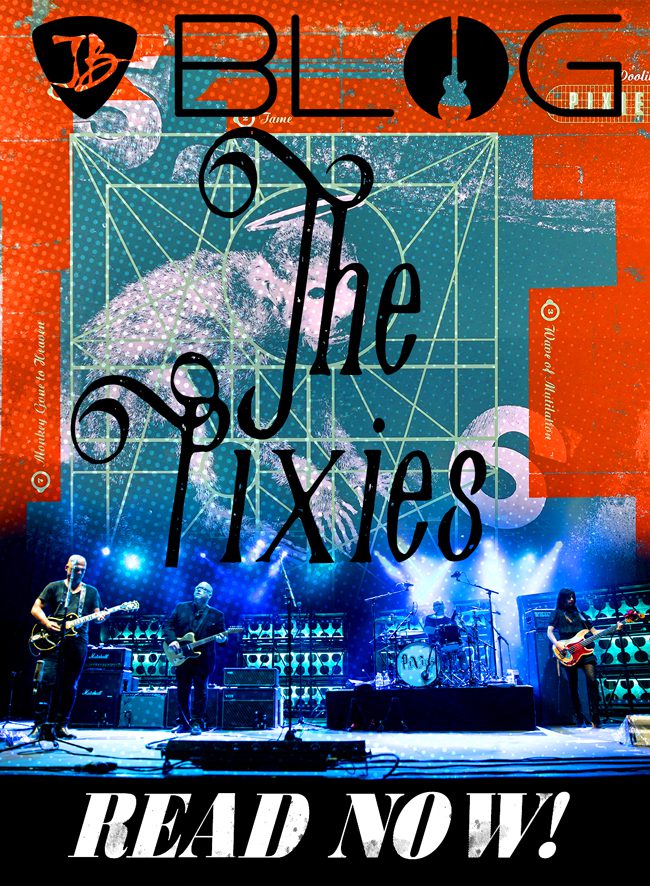 Pixies, is an American band from Boston that along with other bands, defined alternative rock in the 1990s. Furthermore, their loud aggressive guitar playing and infectious melodies, put them in the forefront of Alternative music.

Often, there are comparisons to the Velvet Underground which is understandable. Considering that both bands created their own path when it came to their music. You either like it or hate it. Just like the Velvet Underground, they too had that cool band persona without even trying. Both were the curve that inspired other bands just by being themselves and being experimental.

They helped to change the format of hard rock while inspiring the likes of Radiohead, Nirvana, Pavement and more! Even David Bowie loves this band by calling them “The most compelling band outside of Sonic Youth in the entire eighties” “They are a sound band with pure dynamics and a great sense of humor underlying in their music.”

The Formation of The Band

Joey Santiago and Black Francis Aka Frank Black met when they lived near each other while attending college in Amherst. Furthermore, they realized that they had a common interest in music and began jamming together. Shortly after, Santiago drops out of college, and they both start working in a warehouse while composing songs and lyrics on the side.

The pair forms a band in January 1986. Two weeks later, Francis places an ad seeking a bass player who likes both the folk act “Peter, Paul and Mary” and the alt rock band Hüsker Dü. Kim Deal is the only person who shows up, and arrives at the audition without a bass. Mainly because she didn’t know how to play one. She’s invited to join as she likes the music and songs Francis shows her.  She obtains a bass, and the trio started rehearsing together later forming the band “Pixies”.

They like the sound that they’re creating as a band but decide that they want to make more of an impact and in need of a drummer. So, Kim Deal’s husband suggests to David Lovering, who is the perfect fit for the band. Lastly, The group arrives at a name after Santiago selects the word “pixies” randomly from a dictionary and liking its definition as “mischievous little elves”.  Shortly after, they start playing gigs around Boston.

Playing a concert with Throwing Muses, they get producer Gary Smith, manager of Fort Apache Studios on board. Furthermore, he really loves the band and wants to record a demo to pitch to the label 4AD.  So, the band makes the demo and gets signed to 4AD. They release the album “Come on Pilgrim” in 1987, followed up by Surfer Rose which gains them a lot of success in Europe. Yet not as much in the U.S. but America does warm up to them not long after. Both “Melody Maker” and “Sounds” gives Surfer Rosa their “Album of the Year” award.

Doolittle – The Most Revered Album

They get a distribution deal with the label Elektra, so they have a budget that allows them to be a little more creative musically.  So, In 1989 the group releases Doolittle, their most revered album, which builds upon the Pixies’ existing formula. Their perfected stop-and-start dynamics that later becomes the formula for a lot of alternative bands. Especially Nirvana.

It produces two critically acclaimed tracks “Here Comes Your Man” and “Monkey Gone to Heaven” which is popular on alternative radio in the US and reaches number 10 on the Billboard modern rock tracks. While it’s great to see the band finally getting the notoriety that they deserve, it sometimes creates a lot of tension especially between Deal and Francis.

The Band Takes a Hiatus

While touring in Frankfurt, the band announces that they’re taking a hiatus. So after their final tour date in New York, they all go their different ways. Kim Deal goes on to form the band, The Breeders, with Tanya Donelly of Throwing Muses and bass player Josephine Wiggs of Perfect Disaster. Their debut album, Pod releases in 1990.

During this time, the Pixies release two more albums Bossanova and Trompe le Monde between 1990 and 1993. Shortly after they are a support act for U2 during their Zoo TV Tour. After this tour, the Pixies go on a sabbatical and focused on separate projects.

In early 1993, Francis announces in an interview to BBC Radio 5 that Pixies are calling it quits. But wait…There’s more!

During 2003 through 2012 the band comes back for a reunion tour and festival appearances. While celebrating the various album anniversaries and basically their last hurrah!  For those you that were lucky enough to buy a ticket to any of their performances, kudos to you! Why? These particular shows were a hot commodity.

Plus, it’s a chance to see the original members performing together for one more time.  In 2013, Kim Deal leaves the band permanently. Meanwhile, the rest of the members is still a band touring and creating music together.  Adding more albums to their musical roster and keeping their legacy going.