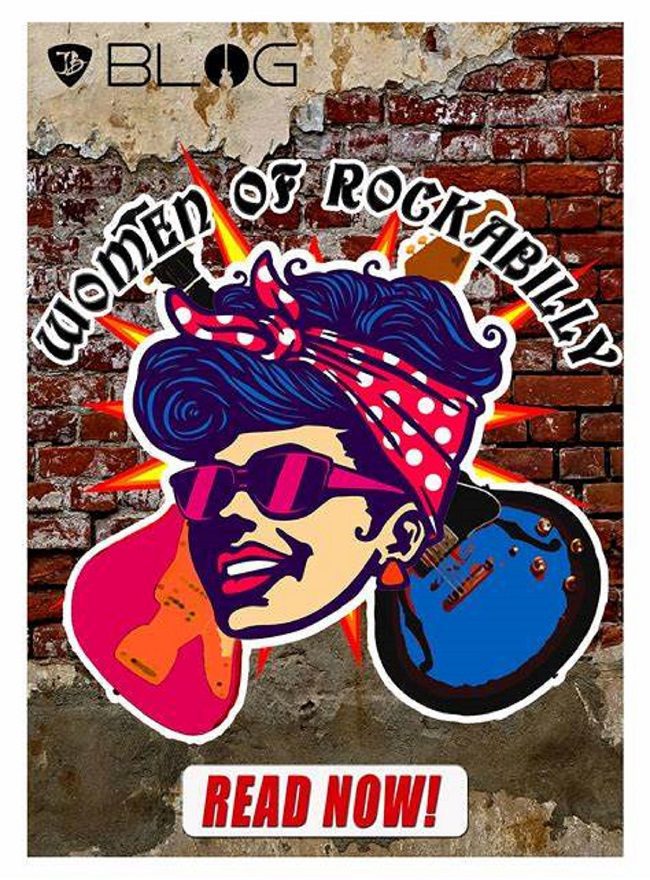 The Wild Women of Rockabilly

The Wild Women of Rockabilly

The wild women of Rockabilly have swagger, can sing, play guitars and do it all with attitude. They defy the norm when it comes to playing their music and furthermore, they aren’t afraid to play loud and in your face. These woman are the retro rebels of the rockabilly world.

She may be the grandmother of rock, but she is also of rockabilly as well. Plus, she also played a wild guitar to boot! Her style is a little slower than the norm when it comes to rockabilly. But all the elements are there along with her hot guitar picking and vocal swoops. He inspired Chuck Berry, The Beatles, The Rolling Stones and Elvis too! She is one bad ass guitar player and grandmother!

Wanda Lavonne Jackson is an American singer, songwriter, pianist and guitarist who had success in the mid-1950s and 1960s as one of the first popular female rockabilly singers and a pioneering rock-and-roll artist. She is known to many as the “Queen of Rockabilly” or the “First Lady of Rockabilly”. Jackson mixed country music with fast-moving rockabilly, often recording them on opposite sides of a record. As rockabilly declined in popularity in the mid-1960s, she moved to a successful career in mainstream country music with a string of hits between 1966 and 1973, including “Tears Will Be the Chaser for Your Wine”, “A Woman Lives for Love” and “Fancy Satin Pillows”. In 2009 she is inducted into the Rock and Roll Hall of Fame. All hail this queen!  For more info click here:

She hails from SoCal-born and bred Kim Lenz is quite a musical powerhouse!  Her musical interest includes everything from Irving Berlin to New Wave and female singers from the 80’s. As the front woman of her group, The Jaguars, she’s keeping her roots towards an Americana sound with a nod to the influences of Western swing and honkey tonk. While performing, depending on her mood, she tends to put a slight punk edge to her performances with her distinctive crooning vocals and heartfelt ditties. Some even compare her to a Modern-day Wanda Jackson or a rockabilly answer to Chrissy Hynde. We leave it up to you on what comparison fits. Either way, Lenz and the band hits it out of the park with their tried and true roots of rockabilly. You can check out more about her here.

Janis Darlene Martin is an American rockabilly and country music singer. Nicknamed the Female Elvis.  She was one of the few women working in the male-dominated rock and roll music field during the 1950’s as well as being one of country music’s early female innovators. She started singing before age five. By Six, she’d mastered chords on her junior sized guitar. It was destiny at an early age. At age 15, Martin signed with RCA Victor in March 1956, just two months after Elvis Presley joined the label. She recorded “Will You Willyum” on March 8, 1956, backed by her own composition, “Drugstore Rock ‘n Roll”.

The song became the biggest hit of her career, selling 750,000 records and hitting the country and pop charts. Soon Martin was performing on American Bandstand, The Today Show and Tonight Starring Steve Allen. She also appeared on Jubilee USA, and the Grand Ole Opry in Nashville, Tennessee, becoming one of the younger performers to ever appear. Billboard named her Most Promising Female Vocalist that year. In the 80’s she had a musical resurgence and was touring and performing again. She continued to perform up until her passing in 2007.

One of the most popular female singers to emerge from Ireland. She has made quite an impact on the Rockabilly scene. Even Bob Dylan is a fan of her music. She has performed with the likes of Lou Reed, Ronnie Wood, Sinead O’Connor and Jeff Beck to name a few. May is a walking, talking, singing embodiment of the 1950’s. Before getting into music, she has spent a good part of the time as a burlesque performer. As for love for rockabilly she got from her brother who was a fan of the genre. To learn more about this awesome singer, check out her website here.

The Hillbilly Moon Explosion are comprised of two Englishmen living abroad – Oliver Baroni, double bass & vocals, and Duncan James, guitar; a French drummer Sylvain Pettitte, and their captivating Italian/Swiss chanteuse, Emanuela Hutter. Their hometown is Zurich in Switzerland. They formed in 1998 and is known for their mix of Rock and Roll, Jump Blues, Swing, Country and elements of roots rock and surf.  They’ve long held the US in their hearts. Way back in 2006 they traveled to San Diego to record an album ‘All Grown Up’ with producer Mark Neill (Black Keys). Since then they’ve become a viral phenomenon, with their ‘My Love For Evermore’ inspiring myriad tattoos, cover versions, 7″ pressings and sixteen million YouTube views. They are currently touring in the U.S. – Check out their Website: www.hillbillymoon.com

The Rhythm Shakers at their core have the look and sound of a late 50’s / early 60’s rock and roll band while at the same time keeping their eyes widely up aimed at the most interesting sounds of 60’s soul, blues and modern music. They’re highly sought after on festivals around the world because they aren’t afraid of making music that seeks to travel to new heights while still respecting the past. One must witness live the high temperature magic that exudes from L.A. clubs and European venues all the same to truly understand that The Rhythm Shakers are at the top of their game. This band is truly amazing to watch live.

For fans of the Rockabilly, there are A LOT more options of bands available that will pique your interest.  We’ve only scratched the surface. Rockabilly is a popular genre but while it’s not as mainstream as it should be, it’s because like surf music, goth, metal, etc., most of these are considered subculture genres, it includes embracing the lifestyle as well. Many fans of these types of genres have their own communities and they support the bands they follow just like the popular genres. You just have to know where to look!  Furthermore, feel free to recommend more artists that we may have missed and should check out. We just started the conversation…Enjoy!