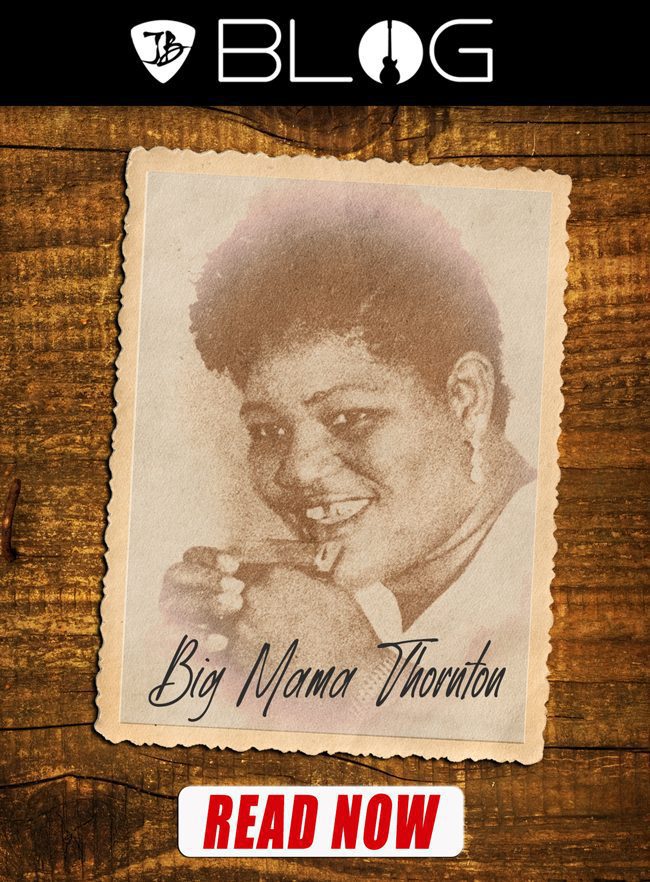 Big Mama Thornton aka Powerhouse blues vocalist Willie Mae Thornton was born in a rural town outside of Montgomery, Alabama. She started singing in church and taught herself how to play harmonica and the drums, later touring throughout the south before moving to Houston to start her recording career.

Her robust voice and confident stage presence earned her the nickname “Big Mama”. In 1952, she scored her the highlight of her career with a 12-bar blues song titled “Hound Dog”. The hit topped the R&B Chart for seven weeks.

Although Big Mama was the first to record the song, Elvis Presley also struck a monster hit with his version. She was also the first to sing “Ball and Chain”, later made famous by Janis Joplin. So, yeah Elvis just have a seat and Big Mama will show you how it’s really done.  Below is a great video of her performing with the “Buddy Guy’s Blues Band.”

She had a commanding approach to the blues mainly because she lived them.  Furthermore, she dressed like a man, smoked cigarettes, drank alcohol and had many other excesses to medicate herself. She didn’t care what other people thought of her.

Still, she never really found a way to cope properly. But when you heard her sing, you felt everything she was going through.  You felt pain, sadness and sorrow in her music. Which for some, it made her music more endearing.

In 1965, she tours with the “American Folk Blues Festival” in Europe, where her success is much more notable “because very few female Blues singers at that time have ever enjoyed success across the Atlantic.” While in England that year, she records her first album for Arhoolie, Big Mama Thornton – In Europe. It features backing by Blues veterans Buddy Guy (guitar), Fred Below (drums), Eddie Boyd (keyboards), Jimmy Lee Robinson (bass), and Walter “Shakey” Horton (harmonica), except for three songs on which Fred McDowell provides acoustic slide guitar.

Her last album for Arhoolie, Ball n’ Chain, is releases in 1968.  By 1969, Thornton had signed with Mercury Records, which releases her most successful album, Stronger Than Dirt, which reaches number 198 in the Billboard Top 200 record charts. Thornton had now signed a contract with Pentagram Records and could finally fulfill one of her biggest dreams. To make a gospel album which she achieves with the album Saved which includes gospel standards.

On July 25, 1984, Thornton is found dead at age 57 by medical personnel in a Los Angeles boarding house. Due to her long term love affair with alcohol she succumbs to her death due to liver and heart issues. In the aftermath of her death, she left a beautiful legacy of music and paved the way for more female musicians. Also, she is often credited with helping to establish the rhythm and blues genre.