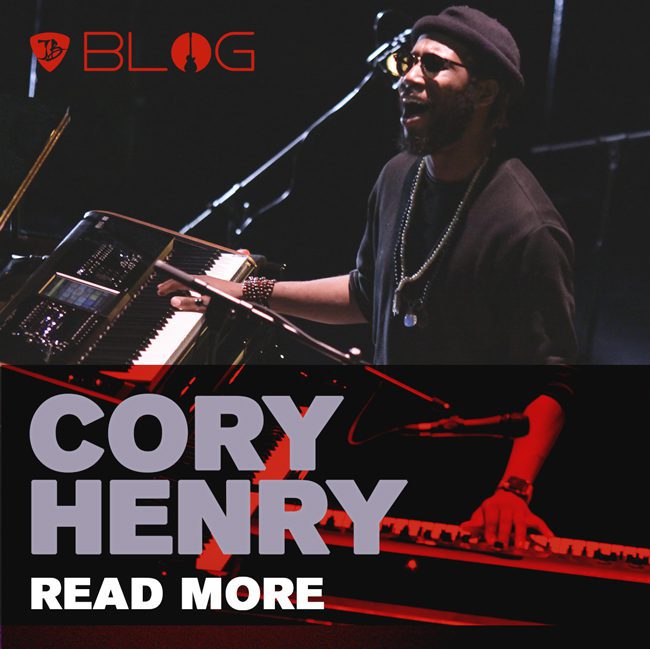 Cory Henry – One of the best Keyboard players of his generation.

While some of us strive to find our place in the world, Cory Henry pretty much knew at a very young age where his path is going. His primary instrument is the organ, and he began pounding the keys at the age of two. At the age of six he competes at the Apollo Theater and makes it to the finalist round. Born and raised in Brooklyn, and today, he’s not only a r&b/soul artist, multi-instrumentalist, vocalist, songwriter, and producer, he’s also become an international sensation playing all over the world.

It turns out that he most likely gets his musical genius from his mother (who also plays many instruments). Below is a video of Cory Henry playing at NAMM 2017. Which is very cool but also, Dr Lonnie Smith is hanging out behind him as well. Nice! As I’m watching the videos of Cory Henry I saw a comment that pretty much said it all. This man can play a Fischer-Price piano and blow everyone’s mind! I agree.

Shortly after…Dr. Lonnie Smith, Cory Henry and Keyon Harrold Jam to “Softly, As In A Morning Sunrise” Three generations of jazz! The interaction between all three players at the end is beautiful!

Cory Henry And The Metropole Orchestra

Furthermore, this guy can play the piano, violin, harpejji, and drums as well as other instruments. But what’s more important is for you to check out is Cory’s collaboration with the Metropole Orchestra conducted by Jules Buckley. It’s a wonderful tribute to Prince, and is recorded live in Rotterdam, Netherlands at The North Sea Jazz Festival 2017.

Only a rare few musicians have such mastery over their instrument and he’s one of them. While he’s at the North Sea Jazz Festival, he performs his first concerts as a member of “Snarky Puppy” but left in 2018 to focus even more on his solo projects. Despite this change he’s already performing at the festival with his own band “The Funk Apostles” in 2016 and 2017, creating big grooves with his jazz, gospel, funk, and pop sensibilities.

A Member of Snarky Puppy

Snarky Puppy is a collective of sorts with as many as 25 members in regular rotation. They each maintain busy schedules as sidemen (with such artists as Erykah Badu, Snoop Dogg, Kendrick Lamar, and D’Angelo), producers (for Kirk Franklin, David Crosby, and Salif Keïta), and solo artists). At nineteen, Cory gets the opportunity to travel with Jazz Legend Kenny Garrett as his organist. A gig that lasted three years. Shortly after he does television work that includes the the third season of Sunday’s Best for BET and on the Jimmy Fallon Show. As well as, Aretha Franklin, Bruce Springsteen, The Roots, P. Diddy, Donnie McClurkin, Michael McDonald, Boyz 2 Men, NAS, and many more.

“Henry’s keyboard skills are on full display during a synth solo in “Trade It All,” which also spotlights his entire band. To my mind, they’d have sounded right at home on Stax Records in the ’70s — no small accomplishment. “Send Me a Sign” then showcases some of the roots of Henry’s songwriting; it’s inspired by church sermons that bloom into group sing-alongs. Just another way Cory Henry digs way back to give us something new and exciting”. – NPR Tiny Desk Concert…Perfectly said!