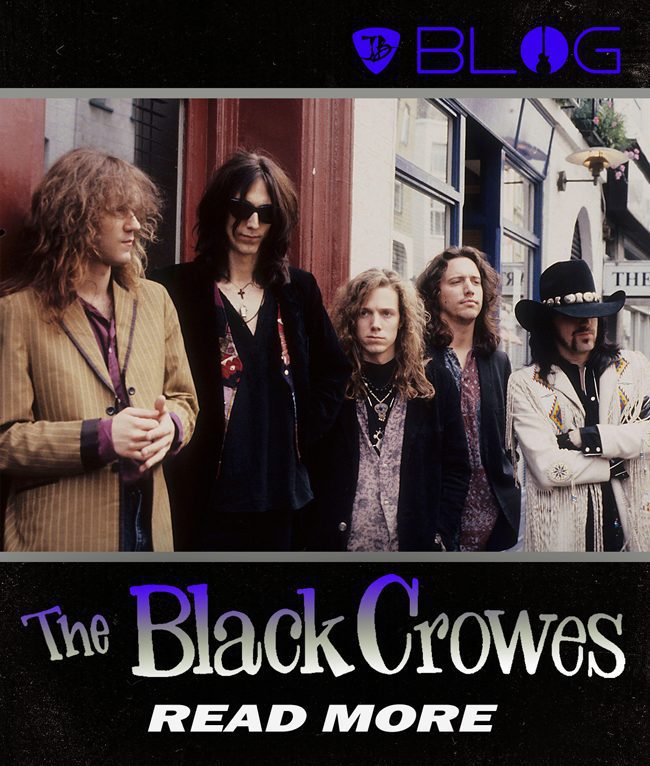 What a radical transformation this band has gone through over the years! For thirty years they have been together forging their way through a wide variety of genres and musical directions. Like most of us know, working with family can be quite a strain on things and this band has seriously had their share! But one thing stands true about these guys and that’s their ability to create great music despite the bumps in the road.

Also, good luck trying to define one specific genre of music with these guys, because seriously they can easily bounce around all over the place when it comes to music! They probably will even take you to church if they’re up for it! That’s how southern bands have always been. Check out “(Only) Halfway To Everywhere” from the album “Three Snakes And One Charm”, which came out in 1996. To add some funk to the mix, this track also features the Dirty Dozen Brass Band! Get ready to jam with this one!

So, they form in 1984 as “Mr Crowe’s Garden” in Marietta, Georgia. Where they’ re influenced by the likes of R.E.M. As well as 1960s Psychedelic Pop and Classic Southern Rock. Shortly after they evolve into a revivalist band dedicating themselves to 1970s-era blues rock. Furthermore, the driving force behind the band has always been brothers Chris and Rich Robinson. As well as the motivation for the rest of the members.

Meanwhile, the first professional demo makes it into the hands of A& M Records in 1987. They get a “demo deal” from the label and become good friends with Steve Gorman, a professional drummer and percussionist and associated with the Stereophonics and studio at the time as well. Later in the year he becomes the official drummer for Mr. Crowe’s Garden.

The band starts out playing as a quartet in New York City clubs such as “Drums” and CBGB in 1988. In 1989 the band – which had stabilized as a five-piece including the Robinsons, Gorman, Johnny Colt, and Jeff Cease meets George Drakoulias, who signs the band on Def American. Basically, he becomes the hype man for the band as well as turning them on to doing covers from the Rolling Stones, Faces and Humble Pie. While they still played Mr.Crowe’s Garden tracks, they finally decide to create a different name which becomes “The Black Crowes.”

Well, one thing you can say about these guys, is that when they start performing and touring, they most certainly can light up a stage! The Black Crowes release their first studio album, “Shake Your Money Maker”, in 1990. Performing the hit “Hard to Handle” which is an Otis Redding tune. As well as “She Talks to Angels”, “Jealous Again”, “Twice As Hard”, “Sister Luck”, and “Seeing Things!” The album sells around 5 million copies and achieves top 30 position on Billboard charts. Shortly after they do their own tour and then becomes a part of the Monsters of Rock Tour in Europe opening for the likes of Metallica, AC/DC, Motley Crue and Queensryche.

Around this time the band replaces guitarist Jeff Cease with Marc Ford and adds Eddie Harsch to the mix as their keyboardist. Lastly, they release their second album “The Southern Harmony and Musical Companion” in 1992. Which debuts at number 1 on Billboard 200. With hits like Remedy, “Thorn in My Pride, Sting Me and several others! They go to do their tour High as the Moon tour and releases “Amorica” achieving Gold status, selling over 500,000 copies. Of course, there is a lot of controversy about the cover, so some stores refuse to carry it (Kind of like the Blind Faith Album cover for Half Speed).

In October 1999, the band is joined by Led Zeppelin guitarist Jimmy Page for two pairs of shows in New York and Los Angeles, and also at the Centrum Centre in Worcester, Massachusetts, yielding a live release, “Live at the Greek” on TVT Records. This collaboration leads to a more extensive tour with Page and The Who in summer 2000. Check out Jimmy Page & The Black Crowes performing  “Nobody’s Fault But Mine”…

The Good Bad And Ugly – The Reunion Moments!

Yep, you heard it right! They’re still a band. Unfortunately like most bands and musicians, the pandemic stopped these guys in their tracks as well. On January 2021, The Black Crowes announce a 30th Anniversary multi-format re-issue of “Shake Your Money Maker”, releasing a previously unheard track “Charming Mess” In 2022, they release, 1972, an EP consisting of covers of famous tracks released in 1972. All we can say is welcome back!