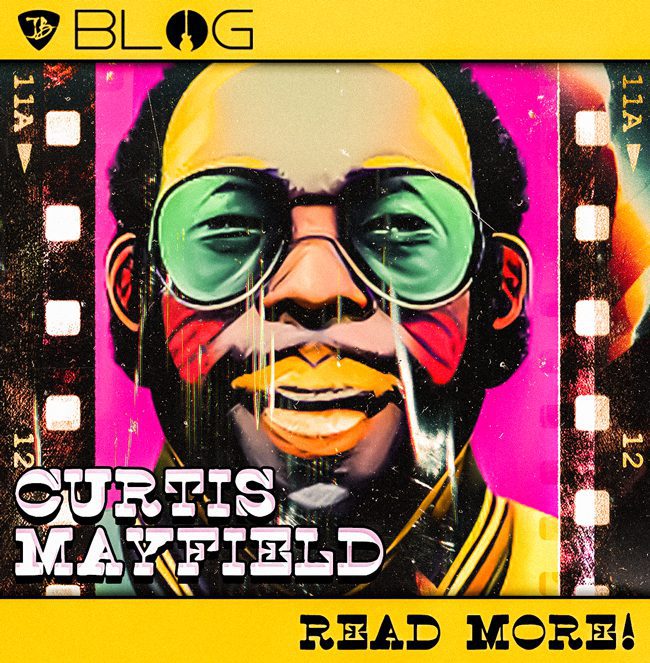 Curtis Mayfield – Man With A Mission

I think the best word to describe Mayfield would be that he’s resilient. Starting out in life, he had a lot of obstacles in his way. One that really affected his journey was growing up in the Chicago projects without a father figure to rely on. Thankfully, he had a mother and grandmother that were determined that he would be something great and he was! With the help of his mother teaching him piano and his grandmother encouraging him to go to church and sing gospel music, it’s no surprise that a lot of his music is inspirational but also with a message for you to take in  and expand on it.

By age seven, he’s already performing in public with the Northern Jubilee Gospel Singers. But, things really start to take off when he receives his first guitar. Which he also taught himself to play as well. By age 14, he’s already performing in a group called the Alphatones. And by 1956 – 1957, he’s writing, composing and the lead vocalist for the group “The Impressions.”

It was the 60’s and at the time Chicago soul music mostly consisted of gospel, pop and elements of everything else that was happening around them and their neighborhood. Whether it was good or bad, Mayfield was right in the middle of it all. He among many others helped to define and ultimately became one of the principal architects of Chicago-based soul music during the 1960s and ’70s. Furthering their sound by being the lead singer, writer as well as their producer.

While Managing to create a group that had quite a run of great hits at the time. Mayfield was among the first of many to bring socially conscious ideologies into the soul genre as well as a being one of the most recognizable voices for social concern and the civil rights movement in the U.S. Other members included, Sam Gooden, and brothers Richard and Arthur Brooks. Butler left in 1958 and is replaced by Fred Cash, and the Brooks brothers leave in 1962.

“People Get Ready” is a song that best represents the civil rights era. Written by lead singer, Curtis Mayfield and performed by The Impressions. It Releases in 1965 on the ABC-Paramount label, “People Get Ready”, also reaches #3 on the R&B charts and #14 on the pop charts. The members of the group at the time were Curtis Mayfield, Fred Cash, and Sam Gooden. Plus, it’s still such a timeless track that resonates current situations happening now.

It’s no surprise that this song is included in the Rock and Roll Hall of Fame’s 500 Songs that Shaped Rock and Roll. In 2015, the song is selected for preservation in the National Recording Registry due to its “cultural, historic, or artistic significance”. While many have covered this song and did a good job at covering it, for me, it’s will be Mayfield’s version with it’s amazing arrangements, and to this day, it’s still the best!

Mayfield – The Songwriter, Composer and More!

Not only did Curtis Mayfield write and compose his own music, he also did a lot of behind the scenes work by contributing to other soul artists from Chicago. Composing hits for the likes of Aretha Franklin, Gladys Knight and the Pips, The Staple Singers. Along with Bob Marley, Donny Hathaway, Tony Orlando and Dawn, as well as hits for The Righteous Brothers, Jerry Butler, Gene Chandler, Major Lance, and The Five Stairsteps and many more!

In 1970, he leaves the Impressions to work on his own projects, such as creating his own publishing company in 1961, and six years later, creates the highly successful Curtom Records. Which becomes the leading producer of soundtracks for black oriented films, the most popular being “Superfly.”  Also, becoming a force when it comes the early development of Funk music. Still, his biggest success creating music soundtracks.

In the 90’s, Mayfield is working on creating a comeback with two releases that he put out and to promote them. To promote the albums, he’s getting ready to perform at Wingate Field in Brooklyn, On August 14, 1990. As the weather starts to go south Mayfield and his band head up on stage to start the show. With about 10,000 people making their way towards the front of the stage, Curtis and the band are set up and ready to go when a huge gust of wind blows throughout the event and then another heavy blast of winds blows through the stage, so strong that it knocks down a metal rig above the band.

All hell breaks loose! Speakers and lighting trusses are flying off the stage and into the audience. A large stage light hits Mayfield striking in the back of the neck and falls down on stage. Six others were also injured that day. But for Mayfield, he couldn’t move, he just laid on the stage floor waiting for medics and an ambulance. It turns out he is paralyzed from his his neck down. Pretty much being told that he couldn’t walk or play guitar. Mayfield also battled atrophy, diabetes, and lost a leg because of it. Despite this, when it came to recording music, he could lay down in the studio and record some vocal tracks. With everything he was dealing with at the time, he passes on December 26, 1999 at the age of 57. Thankfully, he left an amazing amount of music for future generations to come.