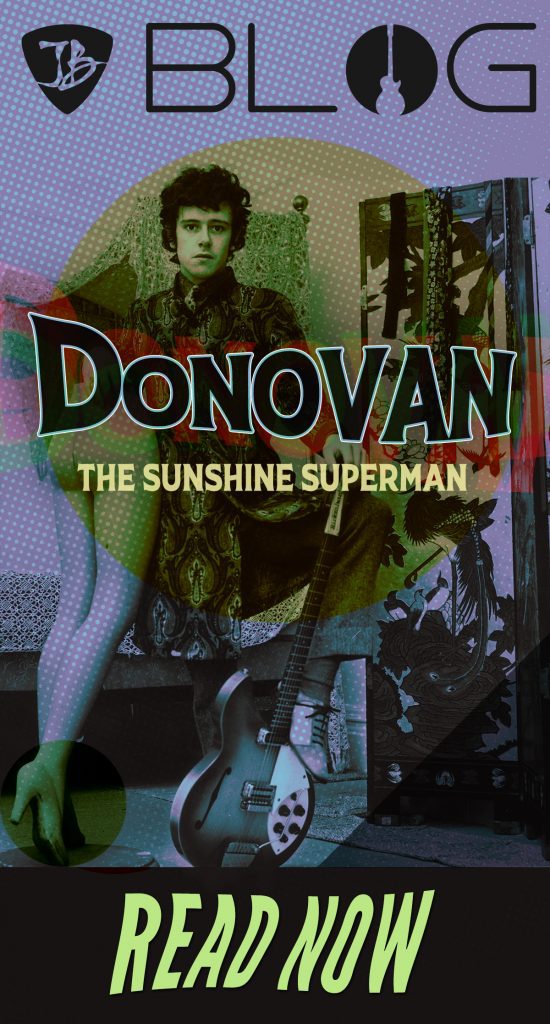 While some would consider him “Britain’s Bob Dylan”, I beg to differ. Sure, there is a likeness to their voices but, Dylan is a serious deep thinker while Donovan, more whimsical. They’re both amazing singers, guitarists and songwriters but that’s pretty much where the comparison should end.

Even more spectacular is that Donovan is present in Dylan’s room playing guitar in “Don’t Look Back,” the Bob Dylan documentary of his 1965 tour of Great Britain. There’s even a video floating around somewhere you can check out of the two of them performing together.

He’s a ’60s troubadour with a number of tracks that embraces the Flower Power movement and the psychedelic era. From a folkie to the poster child for the flower power era.  It’s been an interesting and strange trip indeed for this musician!

This is Donovan’s second hit single in 1965 following “Catch The Wind,” and it shows his roots as a Woody Guthrie like folk-singer. Here he is performing with the assistance from Pete Seeger on “Rainbow Quest” in 1966. Furthermore, Donovan and Joan Baez perform “Colours” live at the Newport Folk Music Festival in 1965.

Headlining the first night of the festival, she brought out the eighteen-year-old Donovan on-stage to perform the track. Oh! to be a fly on the wall for this performance! Needless to say this song became a huge hit!  Afterwards, he releases Fairytales which is around the same time he explores different avenues of music and success along the way.

By the time this song became a hit, Donovan already had several records under his belt before “Sunshine Superman”. Needless to say this song is a breakthrough for him on a conscious level and completely changes his style of songwriting. Furthermore, it pushes him into the limelight which he completely embraces. Even though his life changes with success, he still is searching for something to find himself like everyone else was at the time.

This is when he emerges himself in jazz, blues and Eastern music. And he is entering his most creative phase as a songwriter and recording artist. By working with Mickie Most and with an arranger, musician, and jazz fan John Cameron. Their first collaboration is “Sunshine Superman”, one of the first psychedelic pop records.

While some people say this song was about drugs, other people say it’s about the changes happening around them. With the songs psychedelic outlook and exotic arrangements, it changes people. This could be why its still relevant. You can explore this further. Either way, it ended up selling 800,000 in six weeks and reaching No. 1. It goes on to sell over one million, and is awarded a gold disc

After a while, Donovan studies transcendental meditation with The Beatles on a trip to India. And he even teaches John Lennon and Paul McCartney an acoustic finger-picking technique as well. Furthermore, he helps The Beatles by contributing the line “sky of blue and sea of green” to “Yellow Submarine”.  Interesting enough, he also finds kindred spirits when it came to The Beatles. They had a lot of similar interests about the world, music, and meditation.

During this time, there is the invasion of pop culture, with what they called folk music. Basically a time when music has a pop culture appeal but with angry lyrics. Which includes, protest, civil rights and exploration into the levels of consciousness. For some, it’s too many bohemian ideas, self-change and being a responsibility for the future. In 1966, the engineers, the producers, the songwriters and the fans were ready for something extraordinary to happen. And then the ’60s burst wide open and into full color! A lot happens during these times. And Donovan was right in the middle of it all.

With Mellow Yellow, Donovan says in an interview with NME that the song is about being laid-back, being mellow or chilled out. And he is the one that can calm you down. Donovan set out to capture the mellow vibe of the ’60s with this song, adding what he called “cool, groovy phrases.” These phrases were interpreted in ways he never imagined, as people came up with lots of ideas as to what the song meant.

Most of these interpretations concerned drugs. “While there is certainly a drug influence on this song, it’s about much more than that”. In his Songfacts interview, Donovan said, “To be ‘mellow’ is to be cool, to be laid back, but it doesn’t have to be with a smoke. It can be through meditation. Or it is meditation that became more serious for The Beatles and me, and presenting that in our music.” Now you know.

While this is also a great song by him, this video tells the story behind it and explains it beautifully. And David Lynch? Hmm. Will have to ponder on this part. Donovan in the London Daily Mail Weekend magazine dated May 20, 2006, said, “I was intrigued by the Maharishi Mahesh Yogi’s teachings of transcendental meditation, which were also followed by The Beatles.

I went with The Beatles and George’s wife, Pattie Boyd, Cynthia Lennon and Jane Asher to stay with the Maharishi in the Himalayas for three months. For a while, Mia Farrow and her sister Prudence, shared the bungalow next to mine. She inspired John Lennon to write Dear Prudence. ‘Hurdy Gurdy Man’ was influenced by the sounds I heard there.”  So no, it’s not only just an organ grinder.

This is my one of my favorite Donovan tracks just because of the musical arrangements and because it’s a collaboration with Jeff Beck. Donovan was backed by the Jeff Beck Group on this track.

It’s also produced by Mickie Most who was working both of these artists at the time.

DONOVAN Season of the Witch #1

One of the first songs, to fit the “psychedelic” genre, Donovan recorded it in May 1966, shortly before his highly publicized arrest for possession of marijuana. So yeah, he wasn’t being paranoid about people watching him. Donovan’s arrest proved to be the first in a long series involving the Beatles and the Rolling Stones.

Other artists that have recorded this song are Vanilla Fudge, Stephen Stills, Al Kooper, Joan Jett and Terry Reid. Even the band The Raconteurs cover Donovan’s “Hey Gyp”  on their latest album. All these cover versions, his music being used for commercials and used in movies. This just proves that Donovan’s music still today has an impact on future generations.