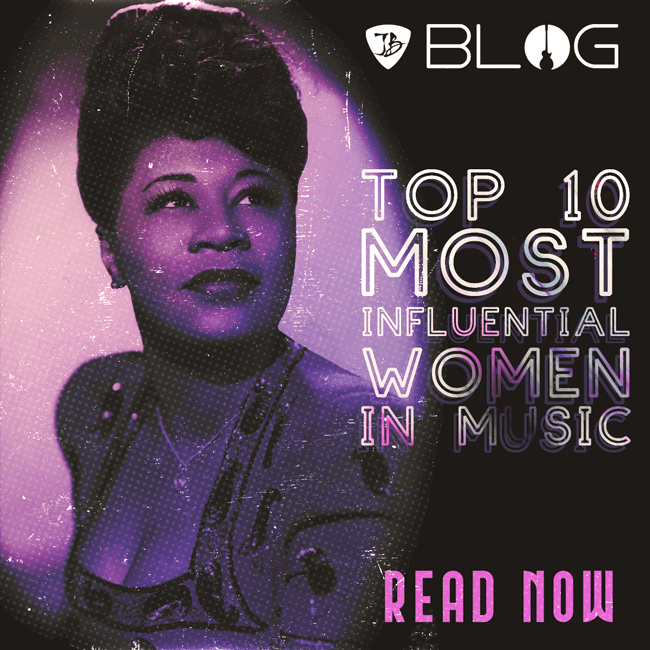 Top 10 Most Influential Women In Music

Top 10 Most Influential Women in the music

Who are the top 10 most influential women in music? While today, women are more in charge of their careers in the music industry. This wasn’t always the case. There were a lot of women that paved the path ahead of them.

These women not only kicked down the doors and took charge of their lives. But even after succeeding, they still continued to make change for future generations. Below is a top ten list of influential women in music. Now mind you, there are “A LOT” of women that should fall into this category!  But for the sake of time and keeping our sanity, we’re keeping it to a top ten scenario.

If your favorites are not in the top ten, let’s just say that we are at least starting the conversation. We’ll be open for further review and conversations down the road.

Lady Ella is noted for her purity of tone, impeccable diction, phrasing and improvisational abilities, particularly in her scat singing. Furthermore, her story is a rags-to-riches story. Fitzgerald finds stability in musical success with the Chick Webb Orchestra as well as the Savoy Ballroom in Harlem. During her career, Ella Fitzgerald has recorded over 200 albums and 14 Grammy Awards under her belt. In addition to over 40 million albums sold.

She is more than worthy of the title, “First Lady of Song”. Due to the fact that she has broken many barriers. Such as being the first African American woman to win multiple Grammy Awards. Which happened at the very first Grammy Awards Ceremony in 1958. But that’s not all, she’s one of the first African American women to perform during a Super Bowl Halftime (Superbowl VI in 1972). A 3-octave vocal range doesn’t hurt her either!

She may be the “Godmother of rock”, but she’s also of rockabilly as well. She starts out as a great gospel musician and singer. And is also one of the first gospel musicians to appeal to rhythm and blues and rock and roll audiences. Her music influences early rock-and-roll musicians, including Little Richard, Johnny Cash, Carl Perkins. Along with Chuck Berry, Elvis Presley and Jerry Lee Lewis.

Tharpe is also an early pioneer in her guitar technique. She’s among the first artist to use heavy distortion on her electric guitar, presaging the rise of electric blues. Her guitar playing has a profound effect on the development of the British Blues in the 1960s. What also helps her career is touring with Muddy Waters in 1964 with a stop in Manchester. British guitarists such as Eric Clapton, Jeff Beck, and Keith Richards to take notice.

Dolly Parton emerges from her years growing up in the Tennessee’s Smoky Mountains. And becomes the most successful country singer of all time. What can I say about Dolly Parton that hasn’t been said already. Well, she’s a smart business woman, singer, songwriter, multi-instrumentalist, record producer, actress, author, businesswoman, and humanitarian.

After achieving success as a songwriter for others, Parton started performing her own music. Composing over 3,000 songs throughout her career. In fact, she has an expansive catalog of standards, but she also has a large collection of unheard songs that she’s storing for the future.

Dolly is one of an elite groups of individuals to receive at least one nomination from all four major annual American entertainment award organizations; Emmy, GRAMMY, Oscar, and Tony. In 2004, the U.S. Library of Congress gave her the distinguished Living Legend Award. She’s the only musician on the planet to have her own theme park, which hires many people from the communities near where she grew up. Just recently, she also celebrated fifty years of being a member of the Grand Ole Opry.

King started out in the very late 1950s as a performer and writer and made her name with Will You Love Me Tomorrow in 1960, which she wrote for The Shirelles with lyricist Gerry Goffin, her first husband. It became the first No.1 in history for an African American girl group and kick-started King’s extraordinary career.

Carole King starts her career writing and producing songs for other recording artists. Also, she quickly makes a name for herself after penning hits throughout the 1960s. These include “The Loco-Motion,” “Up On The Roof,” “I’m into Something Good”. As well as “One Fine Day” and the huge Aretha Franklin hit, “(You Make Me Feel Like) A Natural Woman.”

By the 70s, she broke out as a recording and performing star in her own right, particularly with her smash 1971 album Tapestry, and in 2013 became the first ever female recipient of the Library of Congress Gershwin Prize for Popular Song. She even has a Broadway show called “Beautiful: The Carole King Musical about her life story and career. A lot of songwriters owe a lot to Carole King.

Patti Smith – The Godmother of Punk

Patti Smith aka The Godmother of Punk, was a new kind of artist in music, and in her wake came punk, grunge, alternative rock and indie. So many of the key figures of those genres – from Siouxsie and the Banshees to Kurt Cobain, Bikini Kill, R.E.M., The Smiths – cite Smith as an influence and, in turn, their music has fed back into hers.

Smith’s 1975 debut album Horses, which she once called “three-chord rock merged with the power of the word” was ahead of its time, foreseeing an explosion in DIY music-making and also the targeting of songs to the disenfranchised. And of course who can forget the collaboration with Bruce Springsteen, “Because the Night,” which became a Top 20 hit in 1978. Furthermore, she created music with no apologies and complete honesty.  She redefined the role of the female rock stars for future generations.

Ma Rainey, The Mother Of The Blues

Ma Rainey had an “over the top personality” when it came to performing the blues. Later, she is known as “Mother of the Blues!” Her musical delivery was a direct and to the point style of southern blues. When she performed, she was dressed to the nines in glitzy styled attire with her larger than life voice belting out the blues! Furthermore, she is one of the first Blues singers to record music. And she goes on to record more than 100 singles that make a historical blues imprint for future generations.

One particular song is “See See Rider,” a number that emerges as “one of the most famous and recorded of all Blues songs. (Rainey’s) is the first recording of that song, giving her a hold on the copyright, and one of the best of the more than 100 versions. She is also a shrewd business woman, and retires from the music business in 1935 and settles in Columbus, Georgia. For the next several years, she devoted her time to the ownership of three entertainment venues, the Lyric Theater, Liberty Theatre and the Airdrome.

Diana Ross began singing with friends as a teenager, and eventually formed the groundbreaking 1960s trio the Supremes. Which goes on to have hits like “Come See About Me” and “You Can’t Hurry Love.” Ross left for a solo career in 1969, later reaching No. 1 with hits like “Ain’t No Mountain High Enough” and “Love Hangover.” She stars in the films Mahogany and Lady Sings the Blues as well, earning an Oscar nomination for the latter.

Despite personal and professional ups and downs, Ross has withstood the test of time as a performer with a career that spans more than four decades. Her breakthrough into the music industry becomes an inspiration to a lot of women. With 70 hit singles and 18 No.1s, she remains the only artist to have reached the top as a solo artist, a duet partner, as part of a trio, and in an ensemble; Billboard magazine named her the “female entertainer of the century” in 1976.

Whether you like her or hate her, one thing stands true. She is a goddess at finding ways to get around any obstacles in her path. Seriously, no one has done more than Madonna when it comes to self-determination for women in music. She and a few others have made it to where women in music are taken more seriously beyond a lifespan based on looks and youth. In 1978, she leaves Michigan for New York with $35 in her pocket and found her way into bands as a backing singer and dancer.

After signing to Sire Records as a solo artist, she quickly breaks into the club scene and then into the mainstream with the hit single “Holiday”. Being a trendsetter is a tough business, but she’s one smart cookie and writes her own material, ahead of the game when it comes to technology and using visual elements that were popular in the 1980s.

Also, she never settles on any single direction whether is with her style, music, acting, writing and film-making. Furthermore, pushing boundaries with a mix of controversy.  She’s also about creative and financial Independence in which she creates her label Maverick Records. Beside the label, she has her hand in many other business ventures such as a $120 million deal with Live Nation which changed the financial game for 21st century artists. As you can see, this material girl knows how to get things done.

Bessie Smith – “Empress of the Blues.”

Bessie Smith records her very first single, the chart-topping “Downhearted Blues”, which would set into motion her career as one of the most popular female Blues singers of the 20s and 30s. Featuring Clarence Williams on piano, Smith’s premier single and its B-side, “Gulf Coast Blues”, were recorded for Columbia Records. With 780,000 copies sold in six months, “Downhearted Blues” was a smash hit, and eventually went on to sell 2 million records.

Bessie Smith would go on to become the highest paid African-American entertainer of her day, and earned herself the nickname “The Empress of Blues”. While the song was originally composed and recorded by Alberta Hunter, it is Smith’s version that has received the most attention and praise. Smith would go on to record a number of other hits during her career, such as “The St. Louis Blues”, “Gulf Coast Blues”, and “Nobody Knows You When You’re Down and Out”, but her debut would prove to be her most successful song.

What makes people like Bonnie Raitt and her music? Well, one thing, she always surrounds herself with great songwriters and musicians. She’s a bad ass slide guitar player! And she can make her guitar moan just as good as any of the old school Blues players past and present. She did her homework when it comes to playing and learning the blues.

Bonnie’s personality and sincerity are what wins people over in addition to her music. She’s not pretentious and when it comes to her music and guitar playing. She has an uncanny way of interpreting each song and how it should be perceived and appreciated.

She’s a champion for great American music. She has delved into classic blues, folk, R&B grooves and other styles depending on whatever she’s currently working on. She paved the way for future generations of singers and songwriters. She’s a role model for a lot of artists, musicians, and fans.