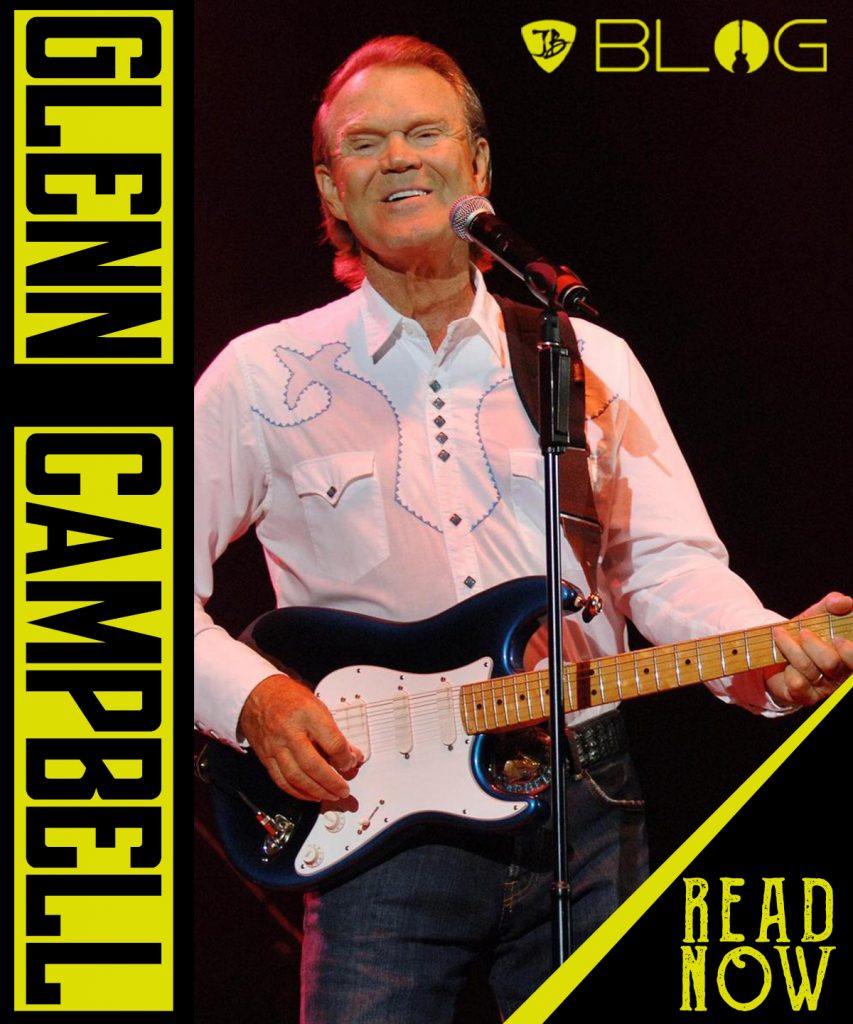 Glen Campbell – Guitar Man. Not only is he the 12th child and seventh son of a dirt poor sharecropper. But he’s also born in the depths of the depression on April 22, 1936. Next, when he’s a toddler, Campbell almost drowns in the Little Missouri River near his families Arkansas home. Lucky for him, his brother Lyndell resuscitates him while others think he’s already dead. But, he survives and along the way, his musical career takes him down many interesting paths.

After surviving the accident, Glen always felt that throughout his life he always had a divine energy helping him along the way. At an early age, his dad takes notice that his son is a musical prodigy. Shortly after he buys him a $5 guitar from Sears & Roebuck at the age of four.

Its clear Campbell has a special talent, so much so that he breaks the poverty cycle and begins to earn a living with his guitar as a teenager and goes on to become one of the most respected, revered and popular performers of the rock ‘n’ roll era.

What also makes him special as a guitarist is that he could only read a little bit of music. Yet, throughout most of his musical career, he could play anything by ear with a little help here and there. But then again, it just goes to show that you can do anything if you set your mind to it, and he’s a classic example of this way of thinking. And he makes quite a career out of it.

In 1958,  He starts his own band called the “Western Wranglers” playing around locally. By 1960 he’s making his way out to Los Angeles where he ends up joining the famous Wrecking Crew as a studio musician. During this time he works with the likes of Sinatra, Dean Martin, Elvis, Nat King Cole, Phil Spector and Merle Haggard to name a few. Pretty impressive opportunities!

In 1961, he releases his first single “Turn Around, Look at Me,” and shortly after releases his debut album “Big Bluegrass Special”. Furthermore, he continues doing studio work and plays on Ronette’s “Be My Baby” and Elvis’s “Viva Las Vegas” album and his phenomenal work with The Beach Boys and countless others. Below is a video from Hee Haw that really highlights two guitar masters having a great time trying to one up each other.

Not many can say that they’ve toured with the Beach Boys, was a part of a powerhouse group of studio musicians. Performing on countless albums for other artists, Having their own television show, Appearing on too many other shows to count. More so, appreciating and embracing all styles and genres of music whether it’s world music, country, bluegrass and more.

One thing I can say about Glen Campbell is that every time he performed for an audience. You could tell that he was a genuine musician. An artist that loved to perform and play for his fans while telling great stories. Lastly, he showed his fans and artists alike, that you can be anything you want to be and not let obstacles stand in your way.

Campbell releases “Ghost on the Canvas” in 2011 at age 75. A short time after recording that album, Campbell is diagnosed with Alzheimer’s disease. A debilitating brain disorder that slowly robs Campbell of his memories and abilities. Despite the sad news, he decides that he’s going out with a bang and doing things on his own terms. Nevertheless, he launches “The Glen Campbell Goodbye Tour,” with his children becoming key members of his band.

A film crew led by filmmaker James Keach follows Campbell for a portion of the 151 sold-out shows as he navigates the disease. The resulting documentary, “Glen Campbell: I’ll Be Me,” is hailed by critics and yields the singer one last Grammy, Best Country Song for his final release, “I’m Not Gonna Miss You,” and a second Academy Award nomination. What a fitting coda to a career that has spanned six decades, touched tens of millions of lives and a place where he felt blessed every step of the way.