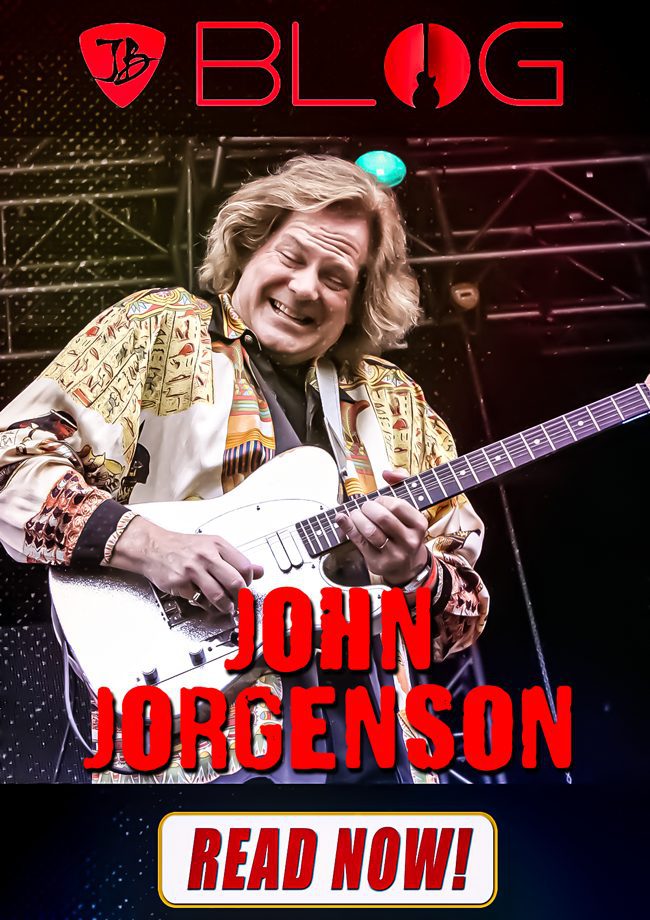 Growing up, I first came across the musician John Jorgenson when he was in the Desert Rose band back in the mid-80s. For those of you not familiar with them, they were a country rock band from California. This is where a lot of people became of aware of what a badass guitarist John Jorgenson is. In fact, Bob Seger, and Bonnie Raitt were fans of his guitar skills. It’s also during this time that he wins the Academy of Country Music’s “Guitarist of the Year” award in three consecutive years.

He even tours with Elton John in 1994 that was only supposed to be an 18-month tour and ends up being a six-year stint. For some reason, I hear the theme from Gilligan’s Island in my head as I write this! But hey, it’s Elton John! Plus, it’s also great exposure for him as a guitar virtuoso! Shortly after he’s doing collaborations with Sting, Bonnie Raitt, and Billy Joel as well as many others. Check out “Hello Trouble” which is a Buck Owens cover.

The Hellecasters – The Trio That Burns up The Stage

An American guitar trio comprised of Will Ray, Jorgenson, and Jerry Donahue (from Fairport Convention).  So, in 1990, this group came together with a chance meeting between Will and Jerry at The Palomino, for those that are not familiar with it is a popular LA music club. The event that the club is doing on this particular night is called “The Barndance” which is basically a showcase of local acts from the area. They both are reminiscing about how much fun it was performing and how cool it would be to get back together as a band with a rhythm section, creating interesting arrangements but going beyond the normal type of band. With the understanding of creating something unique and unusual.

So, calls were made, John was on board and The Hellecasters came to be. Less than a week later, the trio got together to arrange the short set and then brought in the rhythm section for an afternoon’s rehearsal. They reserve a slot for the Barndance, came in with guitars blazing to a packed house that had no idea what to expect! Needless, to say the owner promoted the event so well that the people wanted them to continue playing every week! Checkout one of my favorite video’s from these guys – Yeah, inspector gadget but the three-part harmonies between them are awesome and will make you want to check out more of their videos and so on…You’ve been warned!

Instead, they came back in December because of the holidays, the club actually had to turn people away due to fire regulations. Michael Nesmith, previously of ‘The Monkees’ fame is in the audience one of the nights and a record deal was offered right on the spot! And this is when the band “The Hellcasters” came to be a band. Even though it was only supposed to be a fun night jamming at The Palomino! Many albums later, they’re still kicking ass, performing, and creating records. When they have the time of course!

The Sleep Eazys – With Joe Bonamassa

Joe Bonamassa’s new venture, “Easy to Buy, Hard to Sell,” is an instrumental project with The Sleep Eazys, which also includes Anton Fig, Michael Rhodes, Reese Wynans and John Jorgenson! A fun project for everyone involved but also a homage to the late great Danny Gatton as well. Gatton being a mentor to Joe, they cover his song “Fun House” in their own unique out of this world style. Other tracks include Link Wray, Miles, King Curtis, and John Barry to name a few.  It’s an entertaining album to check out considering everyone that is involved!

While I like a lot of the music, he does with all his different collaborations, I have to say that my favorite is his Gypsy Style of playing. He’s right up there with Django Reinhardt! First off, he’s the master of many instruments such as the mandolin, mandocello, Dobro, pedal steel, piano, upright bass, clarinet, bassoon, and saxophone.

Furthermore, be sure, to check out the other JB blog posts: https://jbonamassa.com/jb-blog/