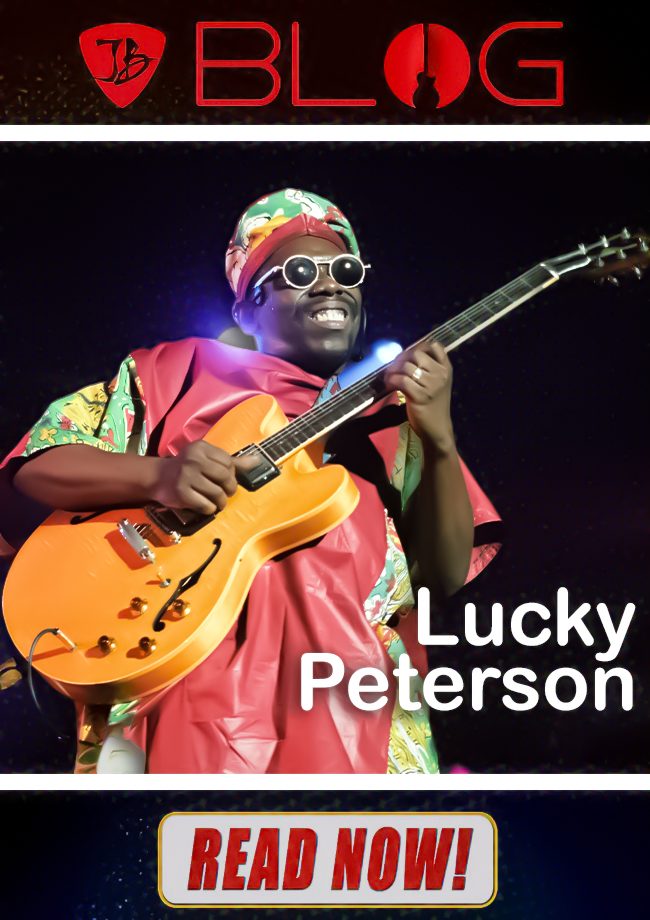 Peterson got schooled in the blues straight from the source. Through his father who was a guitarist and singer, and club owner of “The Governor’s Inn”, a premier blues nightclub. Located in Buffalo, New York. Lucky also got his blues education through his father’s friends who would stop by. Which included the likes of Jimmy Reed, Muddy, Buddy Guy, Bill Doggett and many more. Lucky starts a career as a child prodigy when he captures the interest of Willie Dixon who happens to see this five-year-old playing the Hammond B-3 and takes him under his wing. Shortly after, He is producing Little Lucky Peterson’s first single and album when he’s only 5 years old, for Chicago’s Today Records. With a debut album under his belt, he tours and promotes the album even though he doesn’t even get a dime from it.

Despite this, he trudges forward, and great things start happening for him. Before he’s six years old, he already has an appearance on The Ed Sullivan Show and The Tonight Show! As a teen, Peterson studies at the Buffalo Academy for Visual and Performing Arts, where he plays the French horn with the school symphony. Soon, after, he’s playing backup guitar and keyboards for Etta James, Bobby “Blue” Bland, and Little Milton. This quick video below just shows what an entertainer he becomes as well as how much he loved music. It’s Lucky Peterson at Jazz `a Vienne in 2014 hanging out with the crowd. Furthermore, it’s his live shows that make him stand out as a bluesman!

As a searing lead guitarist, and a rich and powerful organist along with his powerful vocals, Lucky’s musicianship effortlessly translates gospel, rock, and jazz into 21st century blues. When he’s 17, Little Milton hires him to play in his road band. Later spending three years accompanying Bobby “Blue” Bland on tour.  Shortly after, he’s completely in demand as an artist. Picking up gigs touring and recording with the likes of Etta James, Bobby “Blue” Bland, Little Milton, Otis Rush, Kenny Neal, and many others! Being a part of the Blues elite. Also, he always made it a point to let people know that the blues was his foundation despite performing other styles of music. Because for him it’s the source of his inspiration throughout his life. In the early 90’s, he starts to record his own albums on various labels such as JSP Records, Alligator Records, Verve, Gitane, Universal, Dreyfus with his group “The Organization”.

In 2018, Lucky Peterson is touring extensively on his “The Blues are back!” tour which in the summer includes shows at many major festivals in France, Germany, Bosnia Herzegovina, the UK, and other European countries. At times, shouting out to the crowds out of the blue “She didn’t let me go” – which would make the audiences ponder is it a woman or the blues? It’s hard to say! But most likely his wife considering that she usually wasn’t far away from him and hanging out backstage when she wasn’t singing back-up vocals for him. Below is his song “I’m Still Here” from his album, “The Son of A Bluesman” where he pours his heart out and tells things like it is.

As a performer, he radiated star power and had a lot of charisma to boot. But know this! The man could throw down a groove with any song or tempo. With his robust voice that was Chicago Blues wherever he performed. He also didn’t care what size audience he was playing to as long as he made sure that they were having a great time! Shortly after celebrating his 50th anniversary in show business, his family announces on his Facebook Page that Peterson passes away on May 17, 2020, at his home in Dallas. It’s truly a sad day for a lot of Blues fans but at least he left a catalogue of amazing music for future generations. If you’re not familiar with this amazing artist, I suggest you check him on any of the streaming services or his live performances on YouTube.

Furthermore, be sure, to check out the other JB blog posts: https://jbonamassa.com/jb-blog/