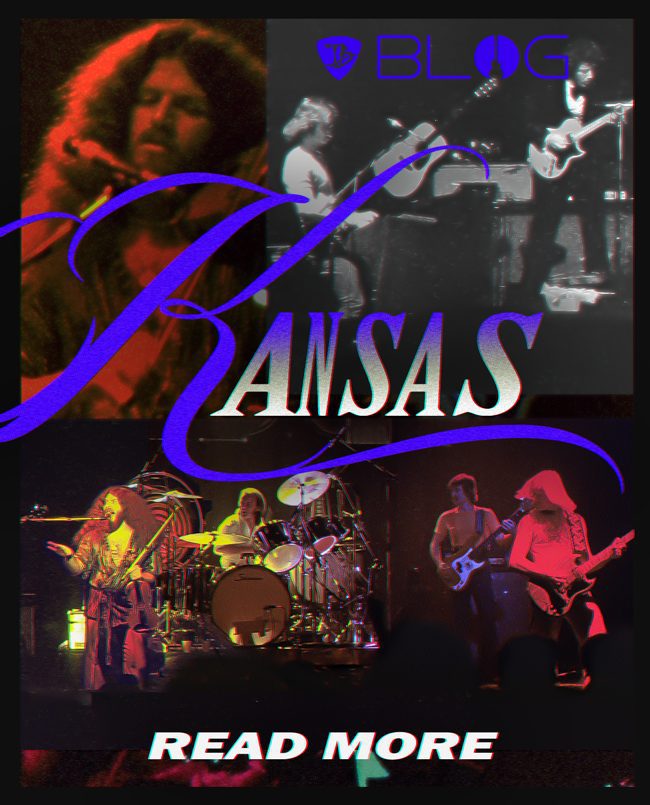 With a legendary career spanning more than four decades, KANSAS has firmly established itself as one of America’s iconic of classic rock bands. This “garage band” from Topeka releases their debut album in 1974 after being discovered by Wally Gold, who worked for Don Kirshner. One thing leads to another, and the band has gone on to sell more than 30 million albums worldwide.

Needless to say, things turn out great for the band! With a catalogue that includes fifteen studio albums and five live albums, KANSAS has produced eight gold albums, three sextuple-Platinum albums (Leftoverture, Point of Know Return, Best of KANSAS), one platinum live album (Two for the Show), and two one million-selling gold singles, “Carry On Wayward Son” and “Dust in the Wind.”

KANSAS also appears on the Billboard charts for over 200 weeks throughout the ‘70s and ‘80s and has also played to sold-out arenas and stadiums throughout North America, Europe, and Japan. Furthermore,”Carry On Wayward Son” continues to be one of the top five most played songs on classic rock radio and has been played on the radio more than three million times!

Like most bands, the name stays the same, but the members come and go and sometimes rejoins the band again! This is pretty much the case for the band Kansas as well. Instead of discussing every single member, I’m just going to name the early members such as “Steve Walsh”, “Robby Steinhardt”, “Kerry Livgren”, “Rich Williams”, “Dave Hope” and “Phil Ehart”.  There have been several changeups in the band, but they still have managed as a whole to keep themselves on the road and relevant throughout the years.

This song was written by guitarist Kerry Livgren. According to Livgren, the song was not written to express anything specifically religious, though it certainly expresses spiritual searching and other ideas. Livgren became an evangelical Christian in 1980 and has said that his songwriting to that point was all about “searching.” Further saying that he was searching for something in his life and that he felt the urge to ‘”Carry On” and continue the search. It’s a fan favorite and there are many different interpretations depending on who you ask. To me, it’s a great song that creates many different interpretations for listeners to consider.

It was a huge hit as well as, “Dust in The Wind.” It was during the time when the band was getting ready to start recording the “Leftoverture” album. Even though the band had enough tracks for the album, he pushed for this song to be recorded. Once they heard “Carry On,” they knew it was a hit and made it the lead track on the album. Rock radio loved the song it worked well on the radio stations.

Needless to say, the album “Leftoverture album” not only propelled Kansas to international stardom but it also kept the band working! “Carry on Wayward Son” is about Livgren’s emotional struggles but in all reality maybe it helped others as well. Plus, it’s also often regarded as one of the greatest rock songs of all time.

Dust in The Wind – Another Instant Success

Livegren reads a book on Native American poetry and a specific line caught his attention “For all we are is dust in the wind.” This got him thinking again about success, money, and other things. Realizing that despite the success and money the band was making, “we all end up in the ground!” Plus, he’s being pressured to write another hit song for the follow up album. Several million records later…Shortly after writing it, he’s asked for more songs for the “Point of Know Return” album. Thinking the band would hate the track but surprisingly they love it! He’s indifferent about it – Because to him it was too slow not a classic sounding song by Kansas.

From 1980 – 1984 – There were tensions among the band on what direction the band going forward. It would be the fnal album with the original band members. But between 1985 – 1990 the band reforms with Ehart, Williams and Walsh returning. But without Livgren, Hope or Steinhardt. The new lineup includes Streets bassist “Billy Greer” and guitarist “Steve Morse” of the Dixie Dregs. The first performances of the new lineup with Morse and Greer took place during a third USO 1st Airborne Rock and Roll Division tour that toured US military bases in the US, Japan, Okinawa, the Philippines, Singapore, Iceland, and most of Europe during the late summer through early October 1986.

In May 1998, Kansas releases “Always Never the Same”, which features Larry Baird conducting the London Symphony Orchestra. The album is a mix of older Kansas material (with new arrangements by Baird), several new songs and a cover of “Eleanor Rigby”. Shortly after “Somewhere to Elsewhere”, a new studio album releases in July 2000, featuring all the original members of Kansas, plus Greer, with all songs written by Kerry Livgren. That same summer, Kansas is the opening act for Yes during their “Masterworks” tour.

In July 2010, Kansas completed a 30-day “United We Rock” tour with fellow classic rock acts Styx and Foreigner. Kansas then began a collegiate tour in September 2010. On this tour they performed with the symphony orchestras of various US colleges in an effort to raise money for the individual schools’ music programs. The success of the tour led the band to start another one the following year. In 2014, Steve Walsh retires.

In March 2015, the band released the aforementioned documentary, “Miracles Out of Nowhere” Which chronicles the band’s formation and follows them throughout their success with “Leftoverture” and “Point of Know Return”. Flash Forward – On July 17, 2020, the band announced the upcoming release of a new studio album, “The Absence of Presence” On May 28, 2021, the group released Point of Know Return: Live and Beyond, with performances taken from various dates on the 2019 to early 2020 legs of the Point of Know Return 40th Anniversary Tour.  As you can see, the band continues to play on!