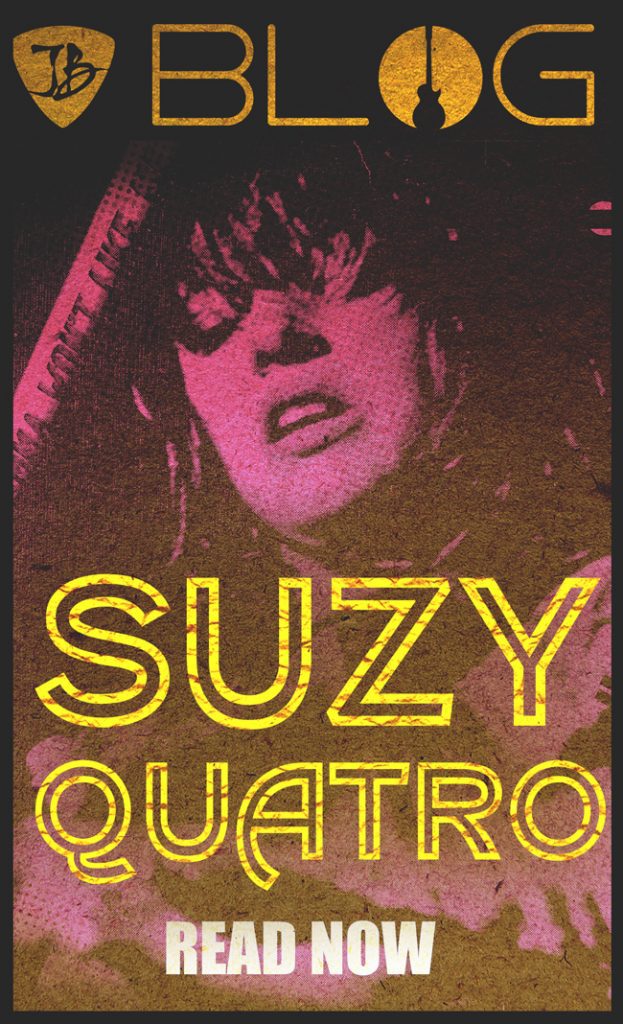 Suzi Quatro is a singer, songwriter, bassist, and actress. She is the first bass-playing female who became a major rock star. Which in turn breaks barriers and paves the way for women to participate in rock.

She’s sold more than 50 million albums and continues to play live all over the world. Quatro has been active in the entertainment industry since 1964. Her musical ambitions were realized at age 5 when she saw Elvis Presley on the Ed Sullivan Show on TV. She knew then that she wanted to play rock n roll!

Raised in a musical family, with 3 sisters and one brother, all of them learn to play various instruments as kids. Suzi makes her initial music debut on stage while playing bongo’s in her father’s jazz band, “The art Quatro Trio”.

From an early age she studies classical piano and percussion, then at age 14, begins an all-girl band with elder sister Patti, called “The Pleasure Seekers”. Calling herself Suzi Soul, She starts out playing the bass but shortly after she’s also the lead singer and front person. In 1971, the Pleasure Seekers change their name to “Cradle” and start playing harder rock.

Music producer Mickie Most saw the group and invites Quatro to come to England to pursue a solo career. So, at the end of 1971, she takes a chance and goes to London. Spending two years in the studio writing and recording songs. While her first single ‘Rolling Stone” is a flop in London, it charts in other places and she starts touring .

Soon after Suzi begins working with now legendary songwriters Chinn and Chapman (Mike Chapman also produces) , which produces the huge hit, “Can The Can”, which goes to number one in May 1973.

Taking Over The Airwaves

From 77-79 Suzi spread her wings and lands a part on the worldwide hit T.V. series ‘Happy Days’. Playing Leather Tuscadero opposite Henry Winkler and Ron Howard. She continues to act in other shows including, Minder, Dempsey and Makepeace, and more up to date, Absolutely Fabulous and Midsomer Murders.

In 1986 Suzi made her West End debut playing the leading role of Annie Oakley in Irving Berlin’s ‘Annie Get Your Gun’ for which she receives critical acclaim. 1988 sees Suzi spreading her wings again, and hosting her own talk show called ‘Gas Street’ which ran for a year.

In 2016, Suzi Quatro received an honorary doctorate from Ruskin College in Cambridge, England, in recognition of her contributions to music. And in 2020, the documentary “Suzi Q” is available on Amazon Prime and covers the life and legacy of Suzi Quatro. As well as featuring a long list of guest appearances by many rock icons.