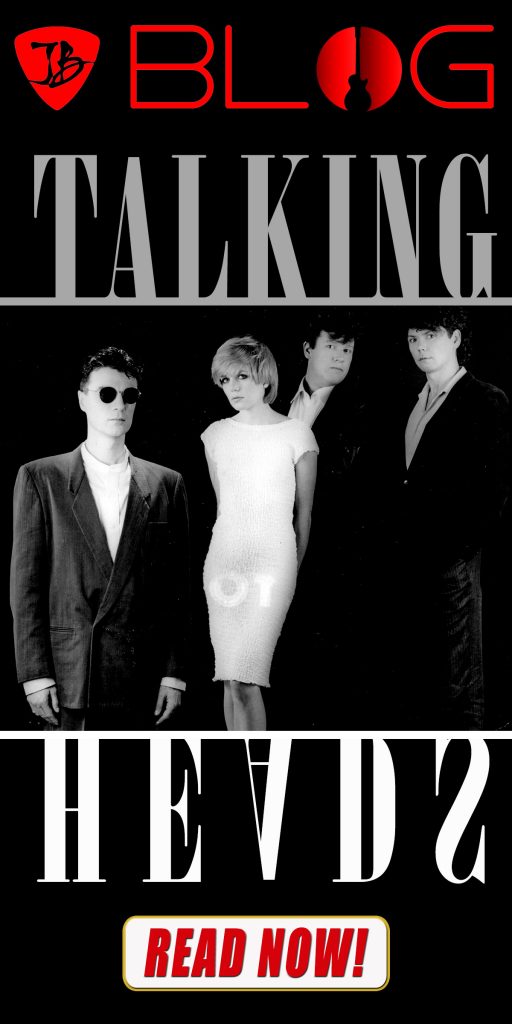 Talking Heads have been around awhile before there were Billboard Charts for Alternative music. Furthermore, they gained their notoriety through constant touring and performing. Formed in 1975 in New York City, the band is comprised David Byrne, Chris Frantz, Tina Weymouth, and Jerry Harrison.

Described by the critic Stephen Thomas Erlewine as “one of the most critically acclaimed bands of the ’80s.” They are pioneers of new wave, punk, art rock, funk, and world music with avant-garde sensibilities and an anxious, clean-cut image.

No charts, just great musicians that like to think out of the box and beyond. It’s ok, their music piqued my attention when I saw them live and since that performance, I’ve been a fan of their many musical mutations ever since. My journey started with hearing “Road to Nowhere.”

The Talking Heads emerged from the same New York scene that produced the Ramones, Blondie, Television and countless other bands. Yet whereas the Ramones were street-level and direct, Talking Heads were arty and abstract. In fact, their first performance was opening for the Ramones at the famous GBGB’s. To be able to see these two shows live would have been quite epic to watch!

The Early Years as Band.

Regulars at New York’s legendary CBGB’s, the band really had a nice breakthrough when Brian Eno came into the picture. A self-described “non-musician”, Eno left Roxy Music and began to collaborate with the Talking Heads and on his solo projects.

Their collaboration brought the 1978 album More Songs About Buildings And Food, an album which continued in the same vein as their first album, but with a more accessible style, lyrics, and songs.

It was a hit with subject matter ranging from home movies to the art world. It also included their cover of Take Me To The River. On the following year’s Fear Of Music the band started to dabble in African rhythms, notably on I Zimbra, and more straightforward pop styles, on Life During Wartime and Cities.

Eno’s unusual style meshed well with the group’s artistic sensibilities, and they began to explore diverse ranges of musical directions. “Take Me to the River,” catapulted the band into the general public’s consciousness and gave the band their first Billboard Top 30 hit.

1979’s Fear of Music, flirts more with post punk rock and subliminal references to the instability of the late 1970s. It produces the single “Life During Wartime” produced the catchphrase “This ain’t no party, this ain’t no disco.” The song refers to the Mudd Club and CBGB, two popular New York nightclubs of the time.

In order to perform their complex arrangements, the band toured with an expanded group, including Adrian Belew and Bernie Worrell. They first appear at the “Heatwave festival” in August, and later in their concert film “Stop Making Sense.” During this period, Tina Weymouth and Chris Frantz also form the splinter group, Tom Tom Club, which is influenced by elements of hip hop and pop.

Furthermore, Harrison releases his first solo album, The Red and the Black. Byrne in collaboration with Eno releases My Life in the Bush of Ghosts, which incorporates world music and found sounds.

Musically, this is a killer performance all around. Arguably, a “favorite among fans” Talking Heads lineup (with King Crimson guitarist Adrian Belew in scorching form!) and most of the “Remain In Light” material performed when it was groundbreaking and new. Die hard fans should love every second of this incredible performance.

Life After The Talking Heads

David Byrne went solo and created the world music label “Luaka Bop.” He’s done everything from films, music collaborations, television and more. He still is creating in fact; you may see a new magazine soon. Too many more projects to list.

Jerry Harrison became a record producer. His résumé includes the Violent Femmes’ The Blind Leading the Naked, the Fine Young Cannibals’ The Raw and the Cooked, General Public’s Rub It Better, Live’s Mental Jewelry, Throwing Copper and The Distance To Here, No Doubt’s song “New” from Return of Saturn, and in 2010, work by The Black and White Years and Kenny Wayne Shepherd.

Frantz and Weymouth have been recording on the side as Tom Tom Club since 1981. Tom Tom Club’s self-titled debut album sold almost as well as Talking Heads themselves, leading to the band appearing in “Stop Making Sense.” They achieved several pop/rap hits during the dance-club cultural boom era of the early 1980s. Their best-known single, “Genius of Love”, has been sampled numerous times. They also have produced several artists, including Happy Mondays and Ziggy Marley. The Tom Tom Club continue to record and tour intermittently, although commercial releases have become sporadic since 1991.

The band played “Life During Wartime”, “Psycho Killer”, and “Burning Down the House” together on March 18, 2002, at the ceremony of their induction into the Rock and Roll Hall of Fame.  And now we leave you with this…Enjoy!