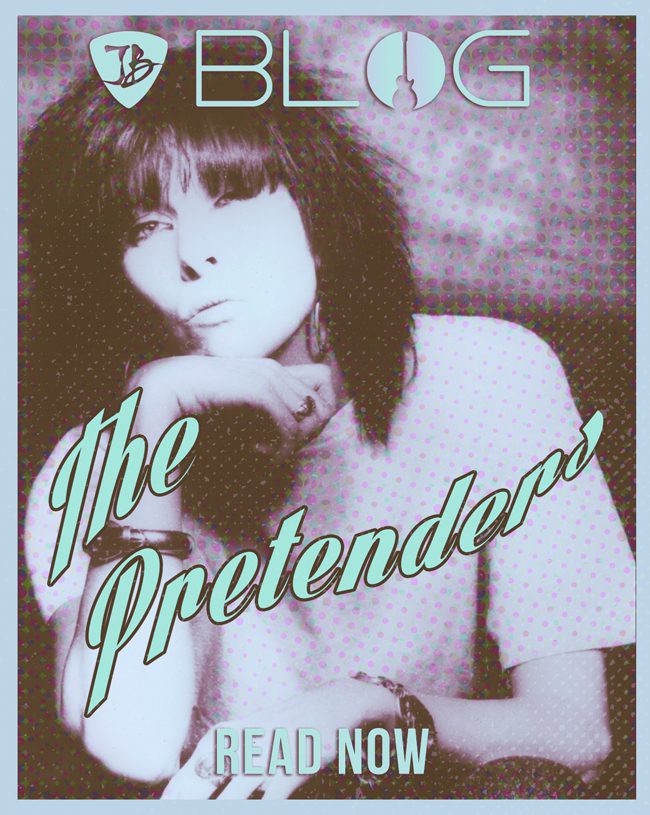 Chrissie Hynde – Her Path in Music

Chrissie Hynde arrives in London in 1973. Looking to find her path in life, where she meets up with New Musical Express writer Nick Kent. Joining the paper She gains an entrance into the chaotic world of rock. Working at the paper, playing in bands and working at Malcolm McLaren clothing store “Sex”.

Shortly after, she returns to America and starts a band called Jack Rabbit. Only returning to London in 1976. Where she plays in a few short-lived bands such as “Masters of the Backside” and The Moors Murderers.

By the time The Pretenders become a band in 1978, Hynde has quite a bit of experience under her belt. Shortly after a local label rep hears some demos of Hynde’s music. He arranges some time in a rehearsal studio, where a three-piece band consisting of Hynde, Mal Hart on bass, and Phil Taylor of Motörhead on drums performing a selection of Hynde’s original songs.

These recordings lead them to a contract with Dave Hill’s “Real Records” which becomes a part of “Sire Records”. Their debut single is a cover of the Kinks “‘Stop Your Sobbing”.  By this time, the classic Pretenders line-up includes Pete Farndon ( bass), James Honeyman-Scott (guitar) and Martin Chambers on drums – The replacement for Gerry Mackleduff.

“Brass in Pocket” is the song that gives them a number 1 position in the UK in November 1979. As well as topping the charts in the U.S. They soon become the darlings of the radio airwaves as well as VH-1 and Rolling Stone Magazine. With the band constantly doing stadium tours their debut album is considered one of the best debut albums of all time.

While things seem to be going great for the band, and Hynde finds love along the way with Ray Davies. The situation takes a turn that affects the band going forward. Pretenders II releases in 1982. Which features ‘The Adulteress’, Message of Love as well as ‘I Go To Sleep’.

During this time, Peter Farndon, the bass player is let go due to his drug problems. Two days later Honeyman-Scott, the band’s guitarist is found dead from an overdose of heroin and cocaine. Nine months later Hynde gives birth to a baby daughter. Lastly, 2 months later Pete Farndon passes from a drug overdose.  It’s enough to make a person want to quit!

“Learning To Crawl” releases at the beginning of another successful year and climbs to number 5 on the US album charts. In my opinion, it’s not as great as their earlier stuff but it does have the epic track ‘Thin Line Between Love And Hate’, the powerful ‘Middle Of The Road’ as well as ‘Back On The Chain Gang’ (the band’s first US Top 10 single). More touring. Back with the Pretenders she appears at “Live Aid” at the JFK stadium in Philadelphia.

Shortly after, she’s enjoying personal success in August 1985. While performing with UB40 on the chart-topping reggae remake of Sonny And Cher’s ‘I Got You Babe’.  The band dismantles and takes a break. During this time, Hynde releases a Jimmy Lovine -produced album at the end of 1987. Two tracks, ‘Don’t Get Me Wrong’ and ‘Hymn To Her’, has some chart success.

Fast Forward to 2020 – The Pretenders are back with “Hate for Sale.” featuring 10 new songs written by Chrissie Hynde and Pretenders guitarist James Walbourne. Also, marking the first time that Hynde and Walbourne have written an entire album together. As well as It’s the first Pretenders outing to feature the longtime touring lineup of Hynde, Walbourne, bassist Nick Wilkinson and founding drummer Martin Chambers. Available Now! All I’m going to say is Welcome Back! We’ve been patiently waiting for this!