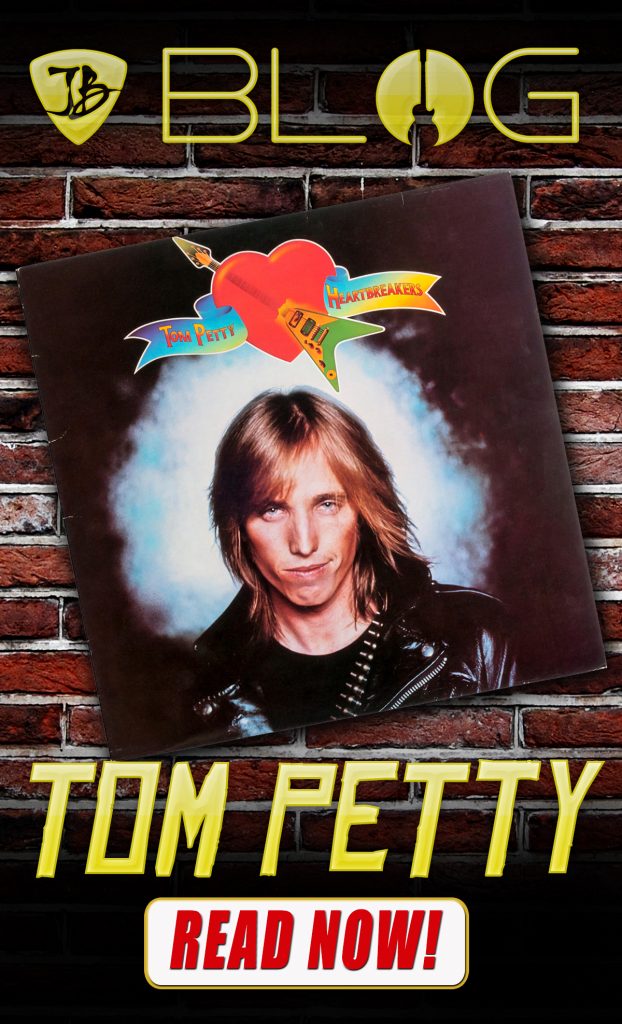 Tom Petty is born during a great time for rock music. Mainly because he is able to experience rock at its early beginnings when it starts to become popular. He grew up in Gainesville, Florida a small farming town, home to the University of Florida and very southern. Furthermore, it’s where his interest in rock and roll music begins at the tender age of ten when he meets Elvis Presley while he’s filming Follow That Dream, in nearby Ocala.

Later, what seals the deal of selling his soul to rock and roll as well as most musicians around the same time was “The Beatles” on The Ed Sullivan Show.  He becomes obsessed with rock music and starts to plan out his future. He thought if they can do it, he could as well. Interesting as well is that Petty’s first music teacher is Don Felder, a fellow Gainesville resident, who later joins the Eagles.

The man with a plan becomes a band

When Petty has grand aspirations of forming a band and making a lot of money, it doesn’t work out quite the way he expected. But sometimes you just trudge forward and eventually hope things start to work out. Before long, music groups were forming in garages all over and Petty decides to quit high school at seventeen. Starting out in a band called the Epics, eventually this becomes the beginnings of “Mudcrutch”.

Mudcrutch’s lineup consisted of Petty (bass and vocals), Tom Leadon (guitar and vocals), Jim Lenehan (vocals), Randall Marsh (drums) and Mike Campbell (guitar). The band issues a locally distributed single (“Up In Mississippi”/”Cause Is Understood”) in 1971 with Petty writing and singing both songs. Tom Leadon and Lenehan left the band in 1972 and are replaced by bassist Danny Roberts and keyboardist Benmont Tench.

Mudcrutch becomes popular locally and plays regular gigs from central Florida to southern Georgia. In the meantime, in Gainesville, they have a long-running stint as the house band at “Dub’s Lounge”. Along with organizing music festivals at “Mudcrutch Farm”, where several band members lived. Unfortunately, things don’t work out as expected and the band splits up and Petty agrees to become a solo artist.

Tom Petty and the Heartbreakers

Tench decides to form his own group, whose sound Petty appreciated. Eventually, Petty and Campbell collaborate with Tench, Ron Blair and Stan Lynch, forming the first lineup of the Heartbreakers. Their debut album is released but America doesn’t embrace them right away. Surprisingly, they achieve greater success in Britain. The single Breakdown allows them the opportunity to tour. They are the opening act for Nils Lofgren. You’re Gonna Get it! The second album release, becomes the band’s first Top 40 album.

Their third album, Damn the Torpedoes, quickly went platinum, selling nearly two million copies; it includes their breakthrough singles “Don’t Do Me Like That”, “Here Comes My Girl” and “Refugee”. The 4th album “Hard Promises”, released in 1981, becomes a top-ten hit, going platinum and spawning the hit single “The Waiting”. Furthermore, it features Petty’s first duet, “Insider” with Stevie Nicks.

Tom Petty and the Heartbreakers received a star on the Hollywood Walk of Fame in 1999, for their contribution to the recording industry. Petty received the Billboard Century Award, the organization’s highest honor for creative achievement, at a ceremony on December 6, 2005

Long After Dark releases in 1982, Southern Accents in 1985, Pack Up the Plantation: Live! also, releases late 1985. Likewise, an invitation from Bob Dylan—Tom Petty and the Heartbreakers joined him on his True Confessions Tour. They also played some dates with the Grateful Dead in 1986 and 1987. Also, in 1987, the group releases Let Me Up (I’ve Had Enough) which includes “Jammin’ Me” which Petty wrote with Bob Dylan.

The birth of the “Traveling Wilburys” was a happy accident. The English-American super-group consists of Bob Dylan, George Harrison, Jeff Lynne, Roy Orbison and Tom Petty. They form in April 1988 after the five members united to record a bonus track for Harrison’s next European single. “Handle with Care” is too good for such a limited release so the group agrees to record a full album. Traveling Wilburys Vol. 1. Following Orbison’s death in December 1988, the band released a second album, which they titled Traveling Wilburys Vol. 3, in 1990.

In 1994, Petty releases Wildflowers it includes the singles “You Don’t Know How It Feels”, “You Wreck Me”, “It’s Good to Be King”, and “A Higher Place”. The album, produced by Rick Rubin, sells over three million copies in the United States. Afterwards, he collaborates on a few soundtracks, does some acting and creates more music.

Into The Great Wide Open

In a statement on his official website, Petty’s wife and daughter said he had multiple medical problems, including emphysema, knee difficulties “and most significantly a fractured hip”. He was prescribed pain medication for these problems and informed on the day of his death that his hip had graduated to a full break.

The statement read, “It is our feeling that the pain was simply unbearable and was the cause for his overuse of medication. We feel confident that this was, as the coroner found, an unfortunate accident”.

Lastly, he was someone who took the time to observe the simple things in life. His music resonated with many. With his laid-back demeanor and southern upbringing, his music was very smart and thought-provoking. He’s a true singer, songwriter and musician that always did things his way and created a musical style of rock that is timeless. https://www.tompetty.com/