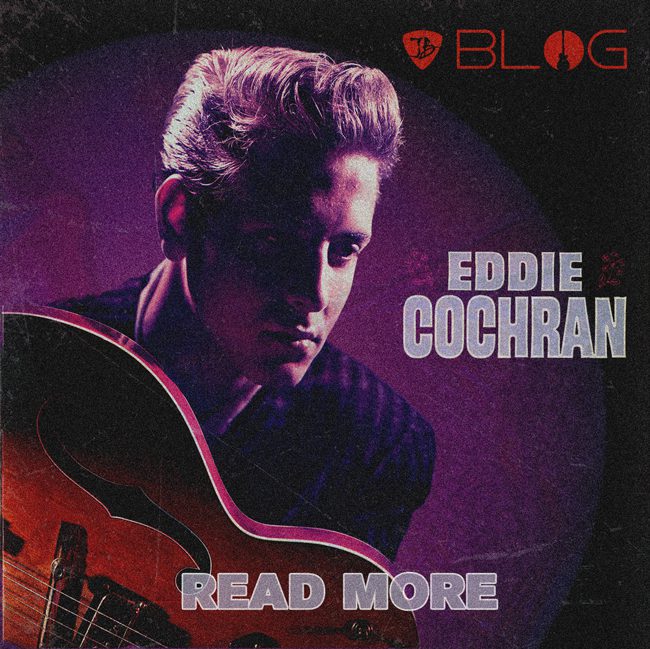 Eddie Cochran – A Master at Music!

For me, Eddie Cochran is right up there with the likes of Buddy Holly, Chuck Berry, Roy Orbison, the Big Bopper and many more! With his mighty Gretsch 6120 in his hand, and his Fender’s mid-sized tweed combos, he easily could push things into overdrive with the greatest of ease. It’s no wonder he took country and rock n roll to another level. Furthermore, this guy, wrote his own songs, often producing them as well. And when it came to instruments, he didn’t just play the guitar, but also piano, bass, and drums.

While this is really cool, what’s more important, is what he did when it came to his experimentation with multitrack recording, distortion techniques, and overdubbing. Making him quite the guitar player with his over the top guitar solos and his rhythmic style. Furthermore, taking his guitar playing to the next level. Add the suits and the swagger along with his rebellious attitude and charm and you got the perfect example of a 1950s rocker that was way ahead of his time, as well as an early pioneer of Rockabilly.

Growing up in Minnesota, his musical influences were mostly in country music which at the time was what he is most familiar with. In school he starts playing drums and eventually moves into teaching himself Blues guitar and piano. Like most of us growing up, Eddie was constantly listening to the radio and playing along with the music he heard. In 1952, his family moves to California. Shortly after he forms a band in junior high with two of his friends and when he gets into high school, he decides to drop out to become a professional musician.

While playing a local show he befriends Hank Cochran who happens to be a songwriter but no relation to Eddie. They form a band called  “Cochran Brothers.” and start performing local gigs and record a few singles for the label Ekko Records. On the side, works in a music studio as a session musician and songwriter. This is a good time for Cochran’s career even if they were only performing locally and then he decides to tour with Hank. It’s during this time that he first see’s Elvis perform live and gets inspired. Afterwards, Eddie decides that Rock ‘n’ Roll is the path he wants to follow. Meanwhile, Hank wants to stick with country. This causes quite a conundrum for both artists. They end up following different paths when it comes to music. Eddie starts out on his own and cuts his first solo single, “Skinny Jim” b/w “Half Loved,” in 1956.

The Ups And Downs of Success

In 1956, he’s asked to appear in the musical comedy file “The Girl Can’t Help It” performing the track “Twenty Flight Rock” live in the movie. (You can check out the great cover by Jack White & Conan O’Brien  performing it in the video below). His first real chart success, is 1957’s “Sittin’ in the Balcony” which is more of a pop number.

While “Mean When I’m Mad” and “Twenty Flight Rock,” releases later in the same year, they are in more in line with what becomes his trademark sound. Neither of them make the singles charts in America. Eddie’s first album, Singin’ to My Baby”, is issued late in 1957.  He also goes on to make a second film appearance in 1957, playing a small role in the teen exploitation flick “Untamed Youth”, where he sings the song “Cotton Picker.”

Another aspect of Cochran’s short but brilliant career is his work as backup musician and producer. In 1959 he played lead for Skeets McDonald at Columbia’s studios for “You Oughta See Grandma Rock” and “Heart Breaking Mama”. In a session for Gene Vincent in March 1958 he contributes his trademark bass voice, as heard on “Summertime Blues”. These recordings are issued on the album A Gene Vincent Record Date.

In 1958, Cochran goes on to find his stride In 1958, in the famous teenage anthem “Summertime Blues”. Which because of this song, Cochran is established as one of the most important influences on rock and roll in the 1950s, both lyrically and musically. Cochran’s brief career includes a few more hits, such as “C’mon, Everybody”, “Somethin’ Else”, “Teenage Heaven”, and his posthumous UK number one hit “Three Steps to Heaven”. He remains popular in the US and UK through the late 1950s and early 1960s.

In early 1959, two of Cochran’s friends, Buddy Holly and Ritchie Valens, along with the Big Bopper, are killed in a plane crash while on tour. Which leaves him badly shaken from their deaths. So much so that he felt that he would also die young.  Which also leads him to give up life on the road and more time in the recording studio. Needless to say, bills had to be paid. Which forces him to start performing again. So he takes an offer to tour in the U.K. in 1960. His tour ran from January – April 1960.

Sadly He and his friend and fellow performing artist Gene Vincent had just finished performing at the last of their scheduled concerts at the Bristol Hippodrome on April 16, a Saturday night. They were traveling along the Bath Road in a taxi from Bristol towards London. Other passengers in the car includes Sharon Sheeley (a 20-year-old songwriter – his fiancé), Patrick Tompkins (the tour manager), and George Martin (the 19-year-old taxi driver). At the moment of impact, Cochran threw himself over Sheeley to shield her. Cochran is ejected from the vehicle, sustaining a massive traumatic brain injury from blunt force trauma to the skull and never regains consciousness.