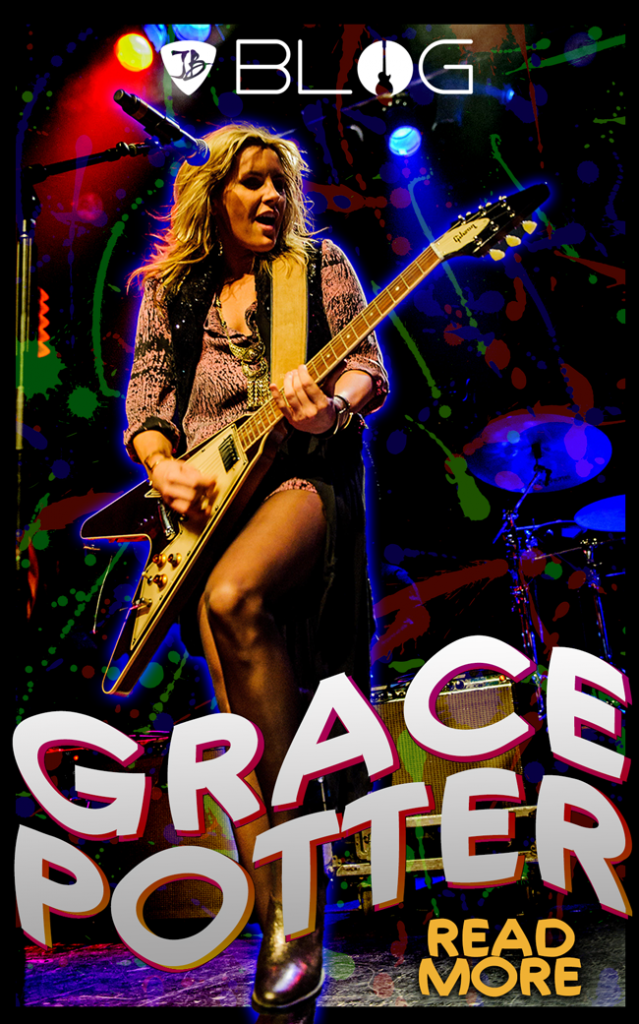 Grace Potter – Playing From The Heart

Hailing from Vermont, she starts playing the piano at age seven and by her late teens she’s playing gigs locally. It’s not only her piano playing that attracts attention, it’s the energy, heart and soul she puts into her music. Although having a voice that can take you to church while pounding on a Hammond B-3 doesn’t hurt either. Like some of us, who grew up on her our parents music whether it was good bad or ugly. Same for Grace, by embracing all styles of music from her parents vinyl collection and doing awesome collaborations with others. She has acquired a large musical  repertoire of music.

“Gold Dust Woman” is a classic song from Fleetwood Mac. But, this performance by Gov’t Mule and Potter from 2010 is also great rendition. Gov’t Mule starts off, Warren’s classic rock vocal stylings and slide guitar starts the song off and then Potter enters to contribute haunting vocals soon after. But it’s their vocal harmonies together that will send chills down your spine. And don’t be surprised if you even catch yourself hippie dancing along with Grace.

Gov’t Mule and Grace Potter are two giants in the jam rock scene and for good reason. Haynes adds much to the music scene with his membership in bands like “The Allman Brothers Band”. As well as “Gov’t Mule”.  At first, Haynes has a skeptical attitude towards Potter when they first started touring together years ago. But shortly after. They soon find out that they are “kindred spirits” and that “her influences and her tastes in music run as deep as his own.”

Whether they’re performing together or by themselves, you can see the high energy performances coming from them. So, when they happen to be in the same area, it’s just natural to see them jam out together. Here’s another outstanding moment when she’s performing Neil Young’s “Cortez the Killer for the 2006 Jammys. Jamming along with Joe Satriani, Steve Kimock, Reed Mathis, Willy Waldman and Stephen Perkins. It’s no surprise this performance receives 700,000 YouTube views at the time.

Grace Potter and the Nocturnals

Over the next year and a half, they toured incessantly. As well as releasing a four-song Christmas EP and a live album in the U.K.  And releasing a digital download-only set recorded live at the Fillmore. Her duet with Kenny Chesney, “You and Tequila,” gets nominated for “Single of the Year Vocal Collaboration” at the American Country Awards. Even performing it at the CMA Awards. In June 2012, a new studio album, “The Lion the Beast the Beat”, by Grace Potter & the Nocturnals releases. Peaking at #17 on the Billboard 200.  Yes, there’s a lot going on!

After all the success from the previous albums, Potter decides that she wants to do a solo album which becomes “Midnight”. With personal issues coming to a head she decides to take some time off. Even though she takes some time for herself, she doesn’t stop writing songs. In 2019, she returns to the studio with Eric Valentine  for the emotionally charged “Daylight”. Which reflects on the Noturnals splitting up, going through a divorce, re-marrying and lastly, the birth of her first child.

Unsigned and entirely free of any pressure to appease anyone. Potter slowly carves out the songs that now makes “Daylight”, an album that emerges as her most emotionally revealing, musically daring, and exactingly realized body of work to date. All we can say is that we’re glad to see that she figured things out and reinvented her life for the better. Also, that she’s back performing again.