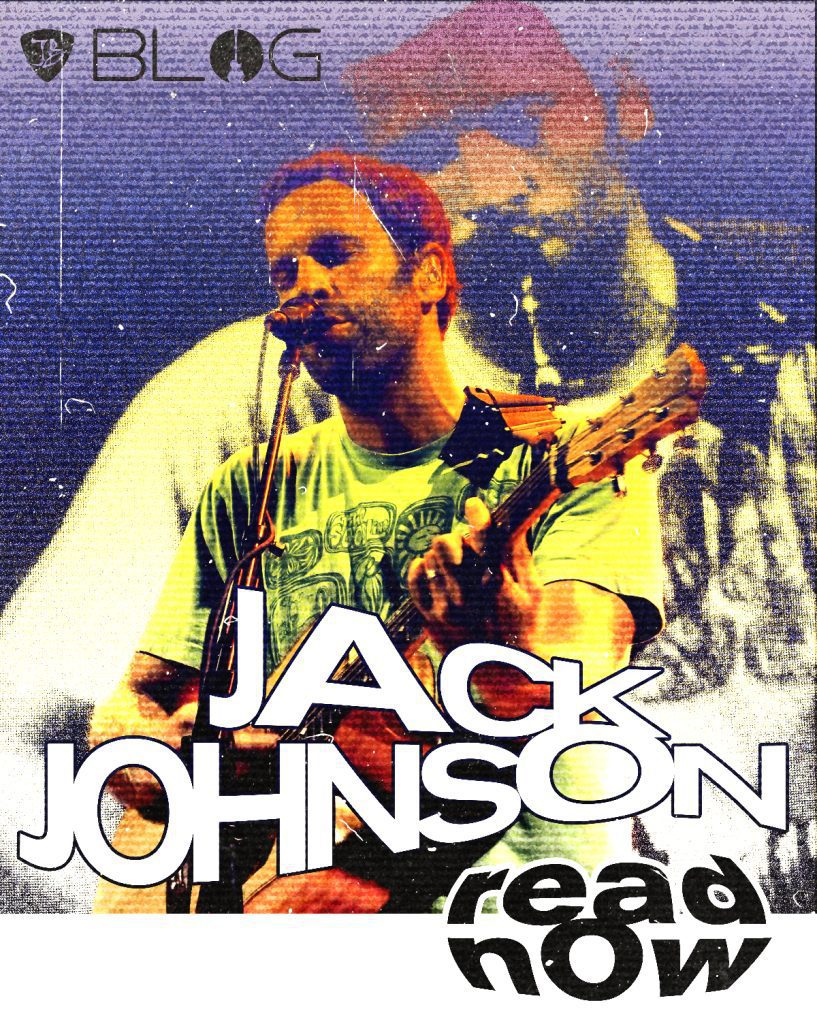 For some, when they think of Jack Johnson, they think of a musician that plays an acoustic guitar and makes great beach music! But seriously, there’s more to him that meets the eye. Born and raised in Hawaii, his musical influences comes from his upbringing on the North Shore of Oahu. With his dad being a professional surfer (Jeff Johnson), he starts surfing at age five and later he’s surfing all over the world with his brothers. Eventually becoming a pro surfer as well. Sadly, his career of being a pro surfer ends almost as soon as it starts when a surfing accident ends his career.

So, he decides he’s going to be a musician since he started playing guitar at the early age of eight which turns into being a songwriter at age 12. But nope, that doesn’t happen, and he heads to college and attends University of California with a B.A. in Film Studies. Well, since he couldn’t surf any more, he directs and scores a surf documentary called “Thicker Than Water”. So, when does he become a musician? Well, he was in a band during college but then after graduating he tries his luck by going solo. And it certainly pays off for him! There’s also a great story on the web about how “Upside Down” went viral because of a TikTok video. Check out the track below:

The College Years and starting out

While at UCSB Johnson opens for then relatively unknown acts such as Sublime and Dave Matthews with far-from-sold-out crowds at the venues. While it certainly doesn’t hurt his career at the time, it does give him a chance to showcases his music and some new fans. As well as a dedicated following  along with appearing on G. Love & Special Sauce’s album “Philadelphonic”.

When it comes to his influences, he credits Dylan, Radiohead, Otis Redding, G. Love and Special Sauce, Ben Harper, Sublime, The Beatles. As well as Bob Marley and Neil Young. The list keeps growing, like some of us, he’s a music geek as well! But his favorite guitarist is Jimi Hendrix!

The release of his 2001 debut album, “Brushfire Fairytales”, further cements his popularity and since then he releases four more successful albums including 2003’s “On and On”, 2005’s “In Between Dreams”, 2008’s “Sleep Through the Static” and 2010’s “To The Sea”. Furthermore, he releases a live concert album and DVD, “En Concert” and records the soundtrack to the film “Curious George”. Also garnering him even more time in the spotlight as well more fans!

Flash Forward to  Jack’s eighth studio album and first full-length release in five years! “Meet The Moonlight”, is produced by Blake Mills (Alabama Shakes, Perfume Genius, Jim James), and engineered by Joseph Lorge and recorded both in Los Angeles (at Sound City and EastWest Studios) and The Mango Tree in Hawaiʻi (Jack’s home Studio). The album released this past Friday, (June 24th) to coincide with the start of this summer’s tour. The album’s lead single “One Step Ahead” which you can check out below:

The Johnson Ohana Foundation is a non-profit public charity founded in 2008 by musician Jack Johnson, and his wife Kim, to promote positive and lasting change within communities by supporting organizations that focus on environmental, art, and music education. Kim and Jack Johnson have been effecting change worldwide by leading the music industry in greening practices and using their success to support many social and environmental issues.

In 2003 the Johnsons founded the Kokua Hawaii Foundation, a 501(c)(3) non-profit organization that supports environmental education in the schools and communities of Johnson’s native home state of Hawai’i.

They also work with “Music Climate Revolution” who partners with musicians, festivals and venues to green their concert events while engaging with fans at shows to take environmental and social action. You can check out more about this non-profit here: https://johnsonohana.org/

To check out all things – Jack Johnson check out his web-site: https://jackjohnsonmusic.com