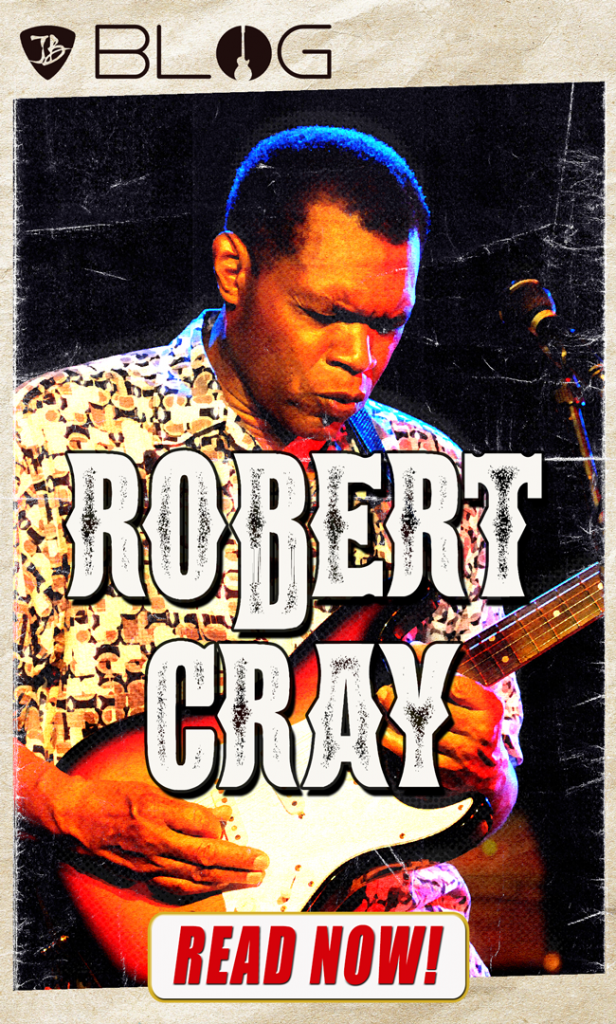 Robert Cray has created a sound that rises from American roots and arrives today both fresh and familiar. In just over 40 years Cray and his band have recorded 20 studio releases. 15 of which have been on the Billboard charts.

He’s played bars, concert halls, festivals and arenas around the world. As well as being among the leaders of the 80’s Blues revival and inducted into the Blues Hall of Fame. Still today if he could, he would be on tour performing for his fans.

I got into Robert Cray’s music from working in music retail. The first time I heard this song, “Smoking Gun” I knew there was something special about this artist. With his soulful vocals and smooth guitar playing, you can feel the emotion in his guitar. Very deliberate and straightforward. Like a fine wine, his music just gets better with time.

When Smoking Gun came out, people started taking notice of his music and like a pied piper, he begins to get quite a fan following from his constant touring going forward. Smoking gun is from the album “Strong Persuader” and at the time of release, receives rave reviews from contemporary critics.

It’s his fourth album and releases in 1986 by Mercury Records. It also becomes his mainstream breakthrough and sells over two million copies. Reaching number two on Billboard Album Rock Tracks and #22 on the Billboard Hot 100. MTV’s airplay helped as well.

What I think is cool about Robert Cray is that he is able to take the genre of Blues and not only do well with it, but also make it more commercial. One could say that he helped to pave the way on how modern blues is being represented today.

Plus, him being a great songwriter really makes a difference. When you see him live, it’s just him and the band, performing. No over the top theatrics, just Cray singing about stories that most of us can relate to in some way. Same thing with his album “Bad Influence.” Another album that creates a buzz among blues fans.

That’s What I Heard

Flash Forward to 2020 with his release of “That’s What I heard” and you see a new chapter in Cray’s musical path. “That’s What I Heard” is a hat’s off to Cray’s soul, gospel, blues, and R&B inspirations. Among this inspirations are Bobby Blue Bland, Curtis Mayfield, The Sensational Nightingales, and many others.

But, it’s not just a covers album there’s a few new originals as well. It takes us back to a time of outstanding moments in music history. Whether he’s taking us to church or out into the streets, or saying farewell to a dear friend. It’s very relatable and worth checking out. Below is another track from his 2020 release that is kind of fitting for the times we’re dealing with at the moment. It’s simplistically funky, complex and edgy at the same time.

From a Fans Point of View

Whether you’re an old school fan or new to his music, you will most certainty find a happy medium in between. While I did skip over a lot of his releases, it’s because to try and write about everything he has accomplished music-wise. It would become an extremely lengthy project.

My suggestion for you is to take the time to embrace each release and form your own opinion. Especially during these turbulent times, music has become a comfort zone for many of us. So, let yourself get inspired and explore! Enjoy.