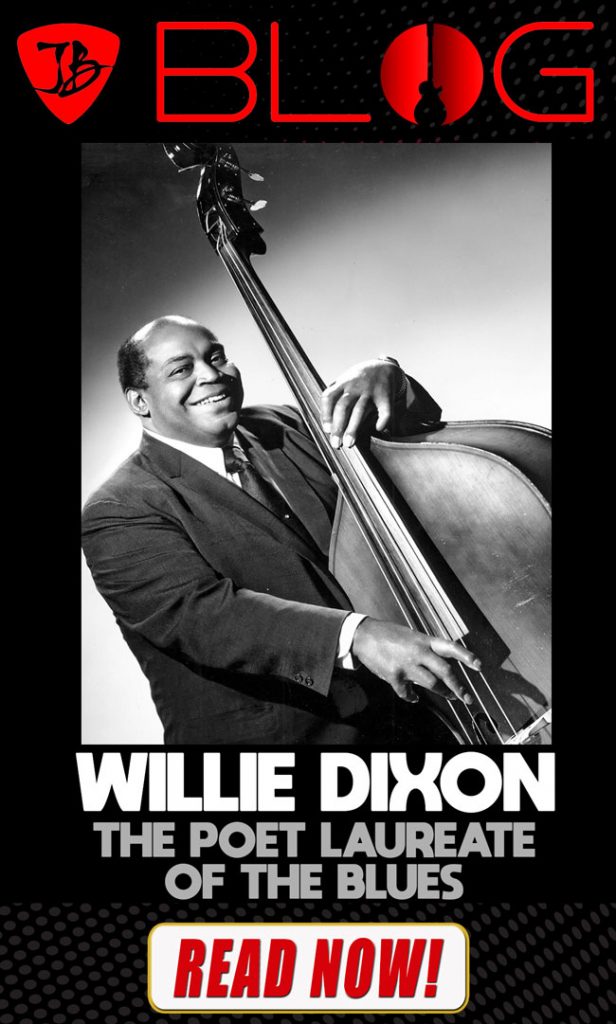 Willie Dixon. Back in the day, he could easily pick and choose whatever he wanted to do. Especially when it comes to the Blues and other projects pertaining to music. With his presence and place in the shaping of the Chicago Blues sound, his legacy to this day lives on. When he’s not performing music, he’s a boxer on the side winning championships.

For example, the Illinois Golden Glove amateur heavyweight boxing championship in 1937. All I say is that he had a lot of side hustles keeping him busy! We’ll get to the rest a little later in this story. Interesting as well, is that he’s Joe Louis’s sparring partner for a time. Being over 6 feet, I might be nervous.

The Early Years – Growing Up

Born in Vicksburg, Mississippi in 1915, he was one of fourteen children. Music is his release especially when he sings his first song at a local Baptist Church at age four. He writes songs and sings gospel songs prior to arriving in Chicago in 1936. Of course, things change when he moves to Chicago, his intentions is boxing as a heavyweight. While boxing doesn’t pan out for him, he ends up going down the path of music. Lucky for us!

Forming the band “The Five Breezes with piano player Leonard ‘Baby Doo’ Caston, they tear up the Chicago Blues scene. By performing at all the Blues bars they can conquer all over at the North Side, also called Chicago’s skid row.  But all in all, they did make a debut at the famous Bluebird label the following year. Just as things are looking for great for Willie, he has to spend time in Jail for evading the draft during World War II. After being released, he starts playing the double bass in 1939. Hooking up with some of his music friends, they form a trio called “The Big Three Trio, which is together from 1946 until 1952.

Dixon signs with Chess Records as a recording artist, but he’s more involved with administrative tasks for the label. By 1951, he’s a full-time employee at Chess, where he acts as producer, talent scout, session musician and staff songwriter. He is also a producer for the Chess subsidiary Checker Records. His relationship with Chess at times causes him stress. But he stays with the label from 1948 to the early 1960s. During this time Dixon’s output and influence were prodigious.

From late 1956 to early 1959, he works in a similar capacity for Cobra Records. Which he produces early singles for Otis Rush, Magic Sam, and Buddy Guy. He later records for Bluesville Records. From the late 1960s until the mid-1970s, Dixon ran his own record label, Yambo Records, and two other labels, Supreme, and Spoonful. He releases his 1971 album, Peace? on Yambo and also singles by McKinley Mitchell, Lucky Peterson and others. This is where he really becomes a key figure in creating the Chicago Blues scene.

In 1977, unhappy with the small royalties paid by Chess’s publishing company, Arc Music, Dixon and Muddy Waters sue Arc.  By winning the settlement, with the proceeds, they start their own publishing company called, Hoochie Coochie Music.

In 1987, Dixon reaches an out-of-court settlement with the rock band Led Zeppelin after suing for plagiarism in the band’s use of his music in “Bring It On Home” and lyrics from his composition “You Need Love” (1962) in the band’s recording of “Whole Lotta Love”. In 1980, Dixon is inducted into the Blues Foundation’s Hall of Fame.

The world is incontestably a richer place because of Willie Dixon’s musical contributions alone. Believing that his work isn’t yet finished, Dixon devotes much of his time in the 60s, 70s and 80s to the organization he founded, the Blues Heaven Foundation.

His vision is to allow the echoes of great American Blues to continue to develop. To encourage a new generation of Blues greats and to provide for the on-going welfare of senior Blues musicians. In 1992 Willie Dixon passes due to heart failure.